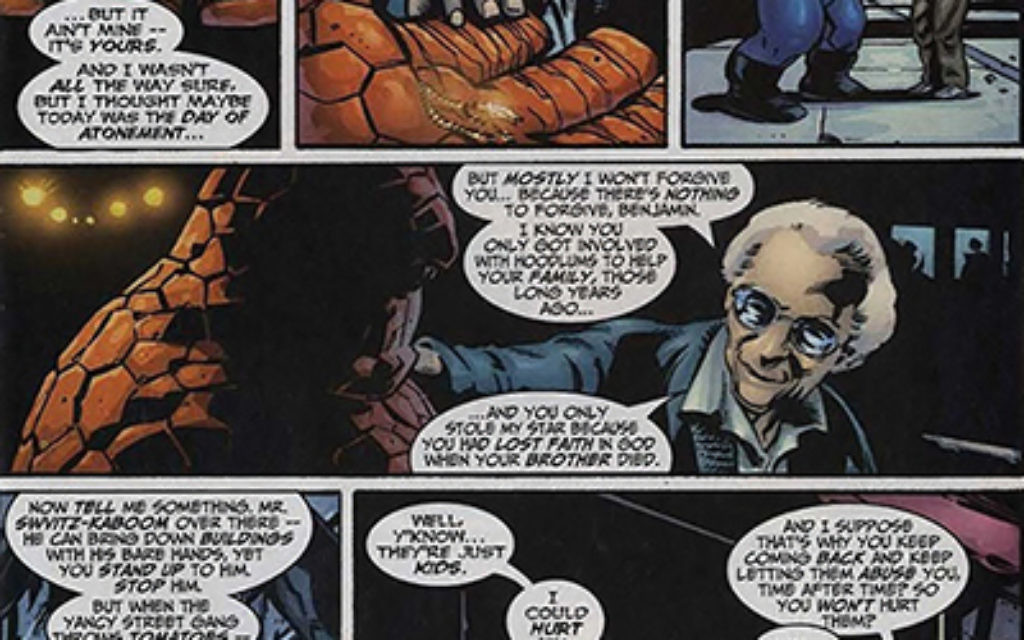 The “secret identity” may be both the oldest and greatest Jewish contribution to literature, from Moses and Esther to the 19th-century poet Judah Leib Gordon’s painful maxim, “Be a Jew in the home, a man in the street.” Even God finds it useful to have a secret self, “hester panim,” said the Jewish mystics, God’s “hiding his face.” But nowhere was the concept more fantastically developed than by the Jewish writers of comic books, where just about every superhero was endowed with a “secret identity,” with Superman — famously created by two Jewish writers, Joel Siegel and Joe Shuster in 1933, the year of Hitler’s seizure of power — as the template for all superheroes that followed.

Of course, all of the 140,000 fans that attended last week’s New York Comic Con, the massive comic book convention at the Javits Center, know this, but like the Torah cycle returning each autumn to Genesis (the Jewish “origin story”), eternal stories never suffer from another telling. Comics, once the stuff of dime stores and daydreamers, have now graduated to dissertations and historians. In the run-up to the event, the freaks and geeks that once populated Comic Con made room for “Comics and Jews” at the Center for Jewish History in the Village, presented by the American Jewish Historical Society, attempting to discover “the real Jewish heroes of the comic book industry.”

Among the speakers at the Oct. 7 talk were Paul Kupperberg, a former editor at DC Comics, and Arie Kaplan, who has written for comics from Superman to “The Simpsons” to Mad magazine.

Today, said Kaplan, with comics “embracing diversity and multiculturalism, there are more openly Jewish characters. Some were conceived as Jewish from the get-go, and some were given a new backstory.” For example, Ben Grim (the Thing), a founding member of the Fantastic Four, created in 1961 by Stan Lee (originally Liber) and Jack Kirby (originally Kurtzberg), both Jewish. The Thing’s civilian name was Benjamin Jacob Grim. Kirby’s father was named Benjamin. Jack Kirby’s actual name was Jacob. The Thing grew up on the Lower East Side, as did Kirby.

And yet, “The Thing wasn’t revealed to be Jewish until more than 40 years later, in 2002, when he was suddenly reciting Shema Yisroel to save a dying friend, possessing a Star of David, and celebrating his bar mitzvah,” a bar mitzvah celebrating the 13 years after Grimm’s character became the Thing.

When you’re writing a book with a whole bunch of characters, said Kupperberg, “there’s usually one guy in the book that’s you. The Thing was Jack Kirby. The tough street kid.”

The Thing was the first major character to become a “Jew in the street,” so to speak, and opened the door for other Jews in the Marvel universe such as “Kitty Pryde” of the X-Men; and “Magneto,” not explicitly Jewish but a Holocaust survivor.

Kaplan, author of “From Krakow to Krypton” (JPS) said that making the Thing Jewish “gave the character more layers, making him seem more part of the real world. An important part of any comic is establishing what sort of world the story takes place in,” what sort of reality or rules. It was once acceptable to be vague “but readers are now getting more reality from television and movies and want it in comics, too. Having Magneto (an X-Men enemy) be a Holocaust survivor explains so much. Not only is he an outcast and embittered for being a mutant, but as a child he was persecuted in Nazi-occupied Europe. That gives the character so much more depth, he’s so much more interesting.”

Kaplan wrote one Superman story, “Man of Snow,” in which Superman is attacked by a golem made of snow. Superman, said Kaplan, realizes that the golem was accidentally set upon him by a sickly Jewish kid with cystic fibrosis, a kid who has the power to make inanimate objects come to life, such as the snow golem that comes to life on Chanukah. The kid is lonely, and Superman comes to empathize with him. The kid’s name is Yosef, which is my middle name,” said Kaplan, “and is based on my growing up in Baltimore, though I didn’t have cystic fibrosis.” Kaplan went to a Modern Orthodox day school and now lives in Astoria, Queens.

Unlike Superman, who lived in generic American places like Smallville and Metropolis, Kaplan points out that later superheroes such as the Thing lived on the Lower East Side, and Spiderman (Peter Parker) lived in Forest Hills, another neighborhood with a heavy Jewish population. Kaplan noted that novelist Michael Chabon, who co-wrote the 2004 film “Spider-Man 2,” called Spiderman “a crypto-Jew” in an interview with Newsweek.

Kaplan added that even before the comics, the Fleischer brothers, Max and David, created the pioneering Fleischer Studios that brought Popeye and Betty Boop to screen, and introduced “follow the bouncing ball” for animated songs. It was Fleischer that first put Superman in animated film. In comparison to Minnie Mouse, say, Betty Boop — and almost all Fleischer characters — were considerably more Jewish in the Lenny Bruce sense: urban, sexual, alternative, thoughtful, and yet appealing to children, just the same.

Kupperberg, an editor at DC from 1991-2006, said, “there’s been an overall awareness and acceptance” of expanding the comics roster “racially and ethnically. Some of it is patronizing. Some of it is sincere. There’s been a push “to refit characters,” such as the “new Captain America, who’s black; a new Thor, who’s a woman. It’s all well and good to get more diversity but I’d prefer that new characters be created, rather than (so radically) retrofitting old characters that have been around for 60 years.”

Kupperberg didn’t see much Jewishness in Superman beyond the origin story, “which was the Moses story, but I don’t know if [Shuster and Siegel] were really conscious of it. For the first year or so, Superman had a tough Jewish attitude, a bad— fighting for the little guy — a very Jewish attitude in the 1930s. He was knocking down doors, beating up wife-beaters, and breaking into the governor’s mansion to stop the execution of someone wrongly convicted. He wasn’t the guy the commissioner would call up and say, ‘Superman, there’s trouble.’ But the production of the story got taken over by the company. Superman became less about fighting for ‘truth, justice,’ and more about fighting characters like Lex Luther.’”

The “little guy” is now “the farthest thing from what you’ll find in modern comics,” said Kupperberg. “Mainstream comics have become ingrown, you have to know what’s going on before you pick it up. It’s no longer the kids’ entertainment that I grew up with; everything is a confrontation, everyone is speaking through clenched teeth.”

“When we were kids,” recalled Kupperberg, “we walked into candy stores and drug stores and there was a spinner rack with comic books. That’s gone.” It was more profitable to sell magazine than comics. “Instead of finding comics anywhere, you have to go to these specialty shops to find them. So you lost that impulse-buy that introduced millions of kids to comics.” And the movies based on comics “are getting darker, and the comics follow suit.”

With all that darkness, maybe comics do need religion. The Thing saying Shema, or the Thing being revived from near-death not through science fiction but by God.

Once Jewish kids putting on tefillin could do so imagining that they were Green Lantern, recharging his ring. Today, the Golden Age Green Lantern, Alan Scott, is gay. “That’s just an example of writers making it up as they go along,” says Kupperberg. “But I never thought the Thing’s Judaism was any kind of retrofit. The Thing was Jewish from day one, even if it wasn’t mentioned for years, even if he had to have a bris with a chisel.”