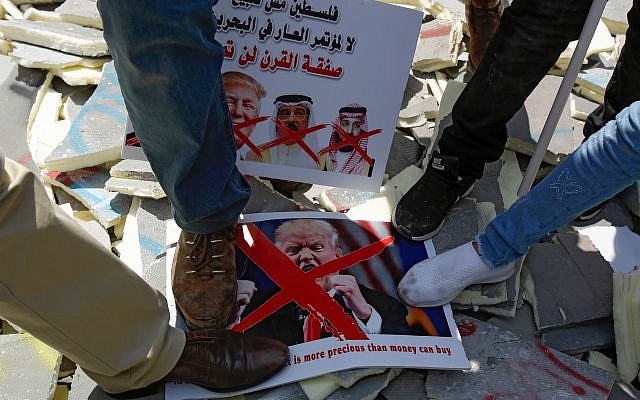 Palestinians stamp on protest signs showing the crossed-out faces of Israeli Prime Minister Benjamin Netanyahu, US President Donald Trump, King Hamad al-Khalifa of Bahrain, and Saudi Crown Prince Mohammed bin Salman, with a caption above in Arabic reading "Palestine is not for sale, no to the conference of shame in Bahrain, the deal of the century will not pass." MUSA AL SHAER/AFP/Getty Images

Tel Aviv — It was 2013. Amid anticipation of the Obama administration’s Israeli-Palestinian peace initiative, a conference in an Arab country gathered together representatives from all over the Middle East to gather support for an injection of badly needed investment for the Palestinian economy.

Six years ago, Secretary of State John Kerry came to the World Economic Forum on the Jordanian side of the Dead Sea to unveil a $4 billion plan that he said could cut unemployment by two thirds and raise wages by 40 percent. Palestinian President Mahmoud Abbas and Israeli President Shimon Peres even shook on it.

But the U.S. peace plan faltered, little if anything was invested, nothing changed.

Now, the Trump administration is preparing to unveil the so-called “Deal of the Century” peace deal, and the U.S. is convening delegates from around the Middle East to meet next week in the Bahranian capital of Manama.

There’s one significant catch: that the Palestinians are boycotting the conference to protest Trump administration policies toward them, and Israeli officials reportedly will not be invited to the roundtable —presumably to correct the appearance of imbalance.

“What is the value of a discussion if the one and only recipient of the aid is not present?” said Oded Eran, a former Israeli ambassador to Jordan, and a fellow at the Institute for National Security Studies. “Why would this conference be different from the donors’ conferences that take place every now and then in an attempt to get economic assistance to the Palestinians?”

The U.S. had delayed the release of the peace initiative at the beginning of the year, a move that protects Israeli Prime Minister Benjamin Netanyahu from political pressure from hardline right-wingers not to go along. After Israel’s parliament voted to hold new elections following Netanyahu’s failure to form a coalition, the rollout of the U.S. plan has been delayed yet again.

Eran and other critics say that diminishes the weight of the Bahrain conference.

“Everyone else that will participate will say: ‘How can you draw a line between the economic and the political?’” said Eran. “How can you discuss the economy without relating to the political situation. If you are an investor, you want to know the political circumstances under which you will make this investment. These questions can’t be separated from a political reality.”

The U.S. is still hoping that Palestinian businessmen will attend. On Tuesday, Netanyahu said that Israelis would be in attendance. Representatives from Jordan, Egypt, Morocco and the Gulf states will be attending, despite widespread skepticism about the contents of the peace plan or the prospects for success.

“These are countries that find it difficult to say ‘no’ to Washington,” wrote Scott Lasensky, an adviser to U.S. ambassadors to Israel and the United Nations during the Obama administration. “The official Palestinian boycott, unsurprising given the frosty ties since the December 2017 Jerusalem announcement, also reveals their increasing isolation regionally.”

The Trump administration has been working on a peace initiative since its early days in office. The effort has been headed up by Trump son-in-law and senior adviser Jared Kushner

Abbas has slammed the plan as the “deal of shame.” Over the weekend, a handful of Palestinian protesters took to the streets in Ramallah to condemn the conference. Palestinian groups have vowed to hold more demonstrations during the conference, scheduled for June 24-26.

Sam Bahour, a Palestinian-American businessman based in Ramallah, said Palestinians see the U.S. administration as motivated by a “right-wing Israeli” agenda.

“They’ve left no room for a Palestinian role in the process. They are trying to bypass the leadership in an effort to speak to the people,” he said.

“The Palestinian economy is not developing for one major reason: there’s a boot of Israeli occupation on our necks,” Bahour continued. “Until the boot of occupation is removed, the economy will not grow, no matter how many grand workshops are convened.”

Tal Schneider, a diplomatic correspondent for the Globes business publication, said that although she believes Kushner and U.S. Mideast envoy Jason Greenblatt are making sincere strides, the American effort is being undermined by the fact that it seems overly deferential to Netanyahu’s political needs. She noted that once the U.S. presidential election starts, Trump isn’t likely to advance the initiative for fear of criticism by evangelical Republicans.

The conference “is an amazing opportunity to discuss things face-to-face. The Palestinians have a lot of issues that need to be floated on a global level: delivery systems, access, payment systems and mobile infrastructure,” she said.

“To do that, the Palestinian business community needs to be in attendance. But it’s sad, with all of the political pressure, they don’t see the reason to go.”

Another development complicating the conference: remarks by administration officials seemingly supporting an Israeli right to annex West Bank settlements unilaterally in some circumstances. Ambassador David Friedman first made the comments that he wouldn’t want to “prejudge” a possible Israeli unilateral annexation of portions of the West Bank. Greenblatt this week endorsed the remarks.

Israeli experts caution that unilateral annexation would violate international law, the terms of Israel-Palestinian peace accords and could undermine stability in the West Bank.

“This would be a death knell to the prospects of a two-state solution,” said Gilead Sher, a former peace negotiator under Prime Minister Ehud Barak.

“In the last 50 years, none of these governments annexed even one square of the West Bank, because the analysis was that the repercussions of such an annexation would be very serious. I don’t think this has changed.”

However, in a letter to Haaretz, former foreign policy adviser Dore Gold argued that the U.S. has on several occasions expressed support for “territorial modifications” of Israel’s borders.

“By suggesting Israel had legal rights to retain some West Bank land, Friedman was not very far away from a traditional American view that appeared in previous public statements,” Gold wrote.

Despite the annexation remarks, a public summit that includes Israelis and Arabs meeting together in an Arab country does count as a diplomatic achievement for Israel —  a small step of normalization of ties.

But the macro prospects for the Trump initiative aren’t encouraging: the Palestinians are too weak to make peace, Netanyahu’s right-wing government isn’t likely to give enough concessions to Palestinians and the Americans aren’t trusted by both sides. The structures for peace are simply not in place, said Ehud Eiran, a political science professor at Haifa University.

The economic conference “represents the style and approach of the Trump administration to foreign policy: very transactional and focused on business deals,” Eran said. “The economy comes first, there’s a lot of room for gestures, but it’s unclear how much substance is behind it. … The big picture is that the deal of the century won’t be in this century.”