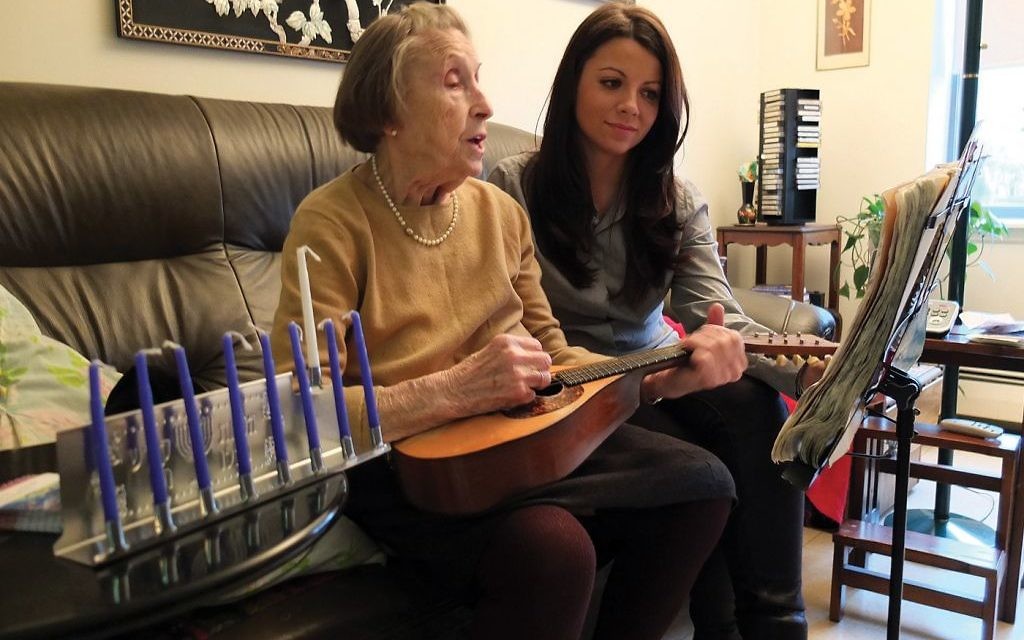 The thanks — the hugs and kisses and tears — started as soon as Masha Pearl arrived at Emily Kessler’s apartment on the Upper West Side last week.

Kessler, 97, above left, is a native of Ukraine, a survivor of the Holocaust. In 1942 she was sent to the Chmelnik ghetto with her young son. She came to the United States in 1980 at age 64, with little knowledge of English. After a career in Ukraine editing school textbooks, she turned to babysitting to make a living until she could receive Social Security six years later.

Pearl, 29, a native of Moscow, is executive director of The Blue Card, an eight-decade-old organization that aids survivors of the Shoah. She became active in the organization after learning the financial plight of many survivors.

Pearl was among several Blue Card volunteers who traveled throughout Manhattan, Brooklyn and Queens the week before Chanukah to bring holiday baskets to nearly 50 aging, isolated survivors.

This is the first year that the organization, which sends checks to thousands of recipients every year before major Jewish holidays, started distributing the holiday packages. For Chanukah: a menorah, some candles, oil, a mix for latkes.

But what’s inside the packages is less important than who brought them — “the human contact,” says Pearl, who joined The Blue Card in 2009 and had led it since January.

Many of the survivors have few visitors, Pearl says; young people like her are a delight for the men and women in their 80s and 90s.

“They were thrilled. They were excited to be getting a visit,” Pearl says. The visitors “remind them of themselves when they were younger.” The survivors tell about their experiences during World War II.

Kessler and Pearl schmoozed for half an hour. Sometimes in English, sometimes in Russian. Kessler described winter in her ghetto. “She never knew when Chanukah was,” Pearl says. “The coldest time” — that’s when she decided that Chanukah must be near.

Kessler got out her mandolin. She serenaded her visitor in Yiddish.

Kessler was among several local Holocaust survivors invited to a Chanukah meal this week at Temple Emanu-El on the Upper East Side on the first night of Chanukah.

She hugged Pearl when their time together ended last week. “She thinks of me almost as family,” Pearl says.

She plans to deliver The Blue Card’s next “Jewish Holidays Program” basket, before Passover, in the spring.

Kessler is looking forward to the next visit, Pearl says. “She told me, ‘Please don’t forget about me.’”