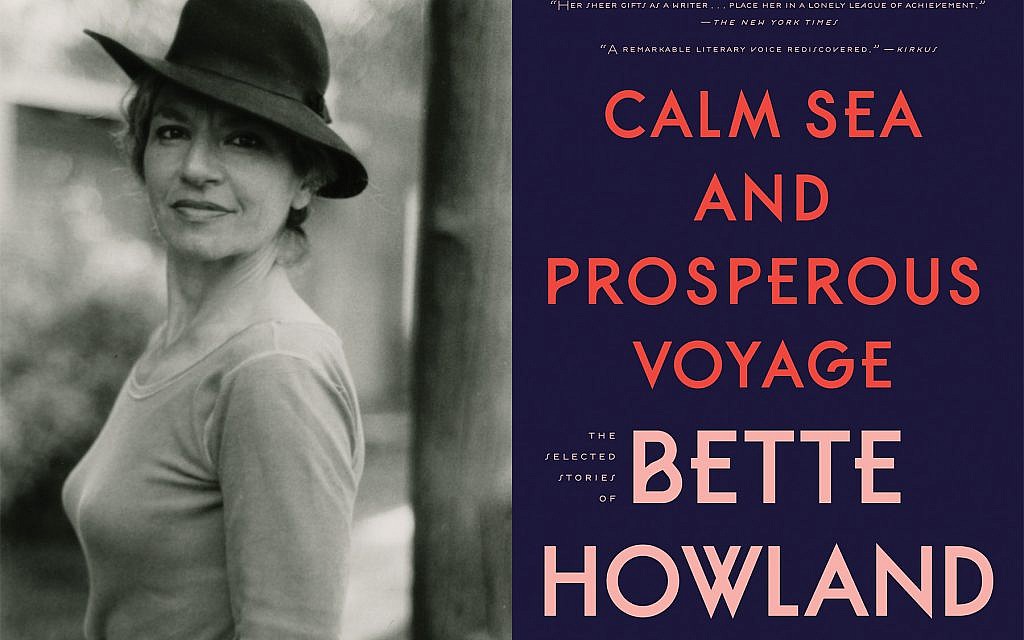 In these newly discovered stories, Howland “comes across as a dreamer whose goals as a writer set her apart from the family mainstream.” Courtesy of A Public Space Books

The wickedly wry-eyed author Bette Howland, who died in 2017, at age 80, has the odd distinction of having been discovered twice: first, in 1961, by the Nobel Prize-winning author Saul Bellow, before she had published anything; and then in 2015, years after all three of her books had gone out of print. That is when Brigid Hughes, the editor of the literary journal A Public Space, found a used copy of Howland’s first book in the $1 bin of a Manhattan bookstore — and became so entranced she launched a book publishing imprint in order to re-introduce Howland’s work. The result is “Calm Sea and Prosperous Voyage” (A Public Space), a warm welcome back to the now no-longer-forgotten Howland and her distinctive voice.

This literary sampler of her work features the unflinching autobiographical stories that made up her second book, “Blue in Chicago,” first published in 1978, along with a selection of previously unpublished and uncollected works. And there is a book story to how Hughes found those materials, too.

Sadly, by the time Hughes had begun to seek Howland out in 2015, she was already in decline, from dementia as well as injuries suffered in a car crash. But in correspondence and conversation with Jacob Howland, Bette’s son and a professor of philosophy at the University of Tulsa, Hughes learned of the existence of a safety deposit box filled with a cache of unpublished material — as well as numerous letters from Saul Bellow, dating from 1961-1990.

Some of those letters have now appeared, for the first time, in an issue of the magazine A Public Space and in Commentary magazine, which had published several works by Howland in earlier decades. In Commentary, along with Bellow’s letters, Jacob Howland expanded on his mother’s life and her relationship with Bellow, her friend, literary mentor and sometime lover. Although he was her elder by 25 years, she “nourished him, too,” he writes.

They shared a great deal. Like Bellow, Howland was a bard of Chicago, even at its most alarming. In “Twenty-Sixth and California,” an essayistic report of the daily tumult at the city’s criminal courthouse, she writes, “I don’t know, maybe it wasn’t such a hot idea to build a city on this site. There is too much energy here. Along with the power of construction goes a power of destruction. Tohu and bohu. Vacant lots, buildings condemned, neighborhoods decayed. Chicago isn’t a city: just the raw materials for a city. The prairie is always reasserting itself, pressing its claims.”

If that sounds a bit like Bellow, too, that’s because her style was similarly energized by jaunty rhythms, sardonic quips, and shrewd observations on the human condition that can tend towards the philosophical, even the mystical. “Let us speak frankly. Where are people to go? People, I mean, who have no place to go,” she writes in “Public Facilities,” her compassionately observed portrait of the aging, scraggly-looking patrons of a local library with “nowhere else of any significance to go.”

Here and throughout her work, Howland’s great theme is the shared ache of human existence, a commonality that sometimes unites us, but more often divides and isolates. She captures this paradoxical push-pull between the longing and the resistance to connect in a wide range of settings and characters, but most poignantly within herself, and most dramatically among the members of her large, multigenerational Jewish family.

We meet her motley, ornery crew of mostly aged relatives at weddings, funerals, and family visits. Her incisive telling of family lore can draw a sharp laugh: “They say Rosie nagged Herschel to death. He got his revenge. All 13 children looked like him.” Her dialogue is perfectly paced. As a priest presides over a cousin’s wedding, Howland hears her mother mutter, “Do you think she’s Catholic? … No one told us she was Catholic.” Meanwhile, across the aisle, she hears the bride’s family whispering. “Jewish. … You really think he’s a Jew?”

At all these gatherings, Howland is alert to both the waves of long-held animus and the unexpected surges of equally long-held affection they can lead to. “I can’t live within ten miles of her; I dread the distance there must one day be between us,” Howland reflects as she says goodbye to her mother after one such event. And yet in saying goodbye, “our cheeks just touched. And we parted — yet one more time — forever.” The poignance of such moments leads Howland to admit to a preference for funerals over other life-cycle events. “Weddings and bar mitzvahs are practically useless,” she writes. “Happy occasions; people are thinking of the presents. At weddings they all want to write their own scripts anyway; be original; make up new words. For funerals, the old words seem good enough.”

Through these characters Howland charts the clan’s history of migration through the danger-filled, deteriorating neighborhoods of Chicago to the safe blandness of the suburbs, and even to the idyll of moving to the country. She herself attempts to exchange city grit for fresh air on a family jaunt to a rural resort, only to find an atmosphere no less pervaded by fear and worry than her urban turf. A change of address is not the answer, she concludes, asking, “So where is it, then? Where is the rightful life that is awaiting us? Where is that undiscovered territory? Where the air is clear and consciences are clean. How do we get there? How do we cut our path through this wilderness? How do we run up our flags and stake our claims? The tyranny, the tyranny of these dreams of peace and quiet.”

In these stories, Howland comes across as a dreamer whose goals as a writer set her apart from the family mainstream, as does her status as a divorced, single mother of two young sons. She ekes out a living working at the local library, but feels depleted and blue from the very effort of trying to fit in, whether with her family or with her own emotional currents.

Howland herself was no stranger to depression. In 1968, she had attempted suicide, after which she spent several months in a psychiatric ward. Concerned, Bellow wrote, in one of his many letters to her, “I think you ought to write, in bed, and make use of your unhappiness. I do it. Many do. One should cook and eat one’s misery. Chain it like a dog. Harness it like Niagara Falls to generate light and supply voltage for electric chairs.”

The encouragement must have clicked. In 1974, Howland published “W-3,” a memoir whose title bears the name of the hospital psychiatric wing to which she was confined. Her book of autobiographical short stories, “Blue in Chicago,” followed in 1978. Her final book appeared in 1983, “Things To Come and Go: Three Stories.” In her review for The New York Times, author Johanna Kaplan described Howland as “a writer of unusual talent, power and intelligence,” capable of “descriptive passages of stunning power and beauty.” A year later, in 1984, Howland was awarded a so-called “genius grant” from the MacArthur Foundation. But the validation of her literary reputation did not lead to the publication of additional books — until now.

And with the discovery of the unpublished material Howland left in her safe deposit box, there may even be more to look forward to. Her stories in “Calm Sea and Prosperous Voyage” are consistently original even if sometimes uneven. They resound with a voice at once gritty and lyrical, despairing even while tenaciously holding onto hope. That Howland’s work is back with us again shows that hope won out, after all.