NEW YORK — “You’ll have to forgive me, I’m 97,” Wynn Handman said, his mind blanking for just an instant on stage. The packed house Friday at the Tribeca Film Festival took their cue to applaud as Handman waved them off, remembering what he wanted to say. “Okay, so the first time I met Raul Julia …”

The occasion was the world premiere of “It Takes A Lunatic,” the upbeat, inspiring documentary about a man who may not be a household name but could very well be the most pivotal person in the world of modern American theater. After the screening, Handman, the film’s director Billy Lyons, critic Jeremy Gerard and actor Michael Douglas held an anecdote-heavy Q&A.

Douglas announced that the movie was picked up for distribution by Netflix, delighting the crowd, many of whom had some sort of connection to Handman. (The man directly behind me indeed muttered an “Oh, Wynn,” at one of his cranky jokes.)

The Jewish-American Handman was born in upper Manhattan back when there were still farms there — this film shows photographic proof! He went on to co-create the American Place Theater, as well as become a groundbreaking acting teacher. While his not-for-profit, subscription-based theater closed after 40 successful years, he’s still teaching, from a wheelchair, out of his tiny micro-stage classroom in the Carnegie Hall tower.

The list of his students is extraordinary: Michael Douglas, Richard Gere, James Caan, Alec Baldwin, Chris Cooper and Susan Lucci are just the ones who pop up in “It Takes A Lunatic” to offer testimonials to his rich and caring style. Frank Langella, Joel Grey, Eric Bogosian, John Leguizamo, Aasif Mandvi, Tony Roberts and (from earlier interviews) Sidney Pollack and Sam Shepard offer commentary about working in American Place productions.

Handman fell into his profession by chance. When World War II broke out, a medical condition prevented him from joining the Navy, but the Coast Guard would take him. His ship was actually the first to take German prisoners at sea, capturing a Nazi weather monitoring station in the Arctic circle. 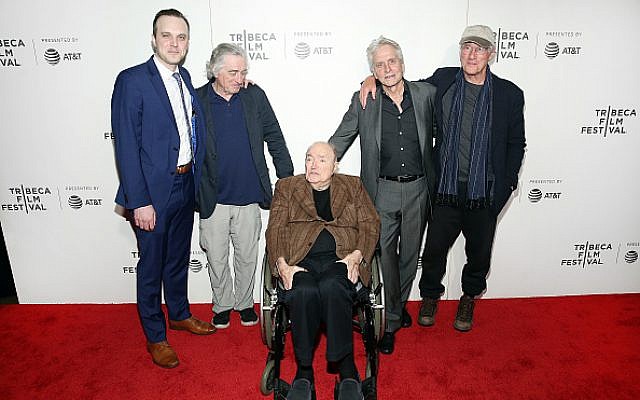 Though the prisoners were treated with dignity, Handman admits that he, as a Jew, had difficulty saluting the captured officers, and fantasized about shooting them. His eventual act of rebellion was minor. Working in the ship’s stores, he was in charge of selling cigarettes. He withheld the Camels and Lucky Strikes, and only sold the Nazis Old Gold, widely considered the lousiest brand. (His commanding officer eventually told him to cut it out.)

But it was being on a ship without too much action where he began doing bits that kept his fellow crewmen entertained. When the war ended he took advantage of the G.I. Bill and enrolled at the Neighborhood Playhouse under legendary Jewish instructor Sanford Meisner. He became Meisner’s protege, working as his assistant for years, until the two began to disagree on technique. (In short: Handman felt Meisner was too dismissive of the written text.) In time Handman broke out on his own.

In the 1960s, hoping to see more cutting edge theater from a diverse range of new playwrights, he formed the American Place Theater. He went the non-profit route to avoid worrying about box office receipts, and relied on subscriptions to do an end run around critics and reviews. Word of mouth, some of it praise, some of it shock, kept butts in seats. 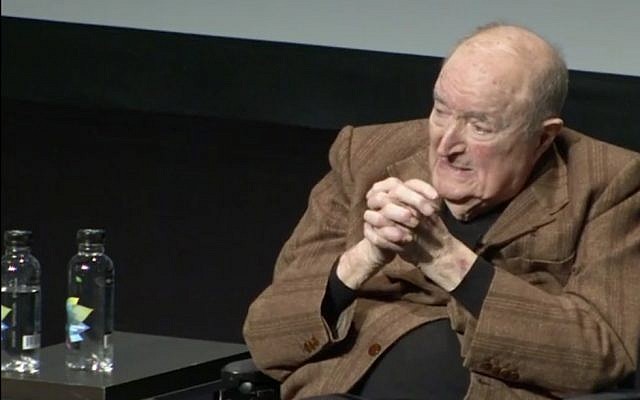 They swung for the fences from the first production. Robert Lowell, better known as a poet, submitted a four-hour collection of three pieces called “The Old Glory.” It was notable for its portrayal of a Spanish slave ship. It was a hit and foretold of the American Place’s commitment to telling stories about people on the fringes, starring and later written by minorities.

In 1967 the American Place Theater created a stir with Sam Waterston starring in Sam Shepard’s “La Turista,” in which a live chicken was decapitated on stage. (After a while, they switched to a dead one with fake blood.) Then came a dark, absurdist work called “The Cannibals” written by Hungarian-born Jew, George Tabori, whose father was killed at Auschwitz. The play was set at the notorious extermination camp and, while it was only a minor success, German producers asked to bring the play to West Berlin.

At first Handman didn’t want to do it, having vowed never to go to Germany, but relented. “The Cannibals” was a sensation, and is a significant artistic step toward Germany’s reckoning of its past. Tabori stayed there for the rest of his career, exalted as a major writer.

“It Takes A Lunatic,” which gets its title from a comment a lawyer made to Handman when he asked if his non-profit theater could ever succeed, is not exactly a riveting film, but it is fundamentally nice. Anyone who has taken an acting class will like sitting in on Handman and his students. It’s also great to catch glimpses of New York City spaces of the mid-to-late 20th century. Hollywood is all glamor. Off-Broadway theater is not. The posters are cheap, the seats are falling apart, you can practically hear the clanging radiators looking at the old photographs. For many of us, it’s home.

The celebrity voices in the film are all about the craft, which means there isn’t any gossip or footage of wild parties. There’s not even much about Handman’s wife and daughters. But as Michael Douglas said from the stage, “More than anything else, Wynn was there to give us confidence.” There is a warmth that comes off the screen in nearly every scene. Here’s someone who well deserves a curtain call.