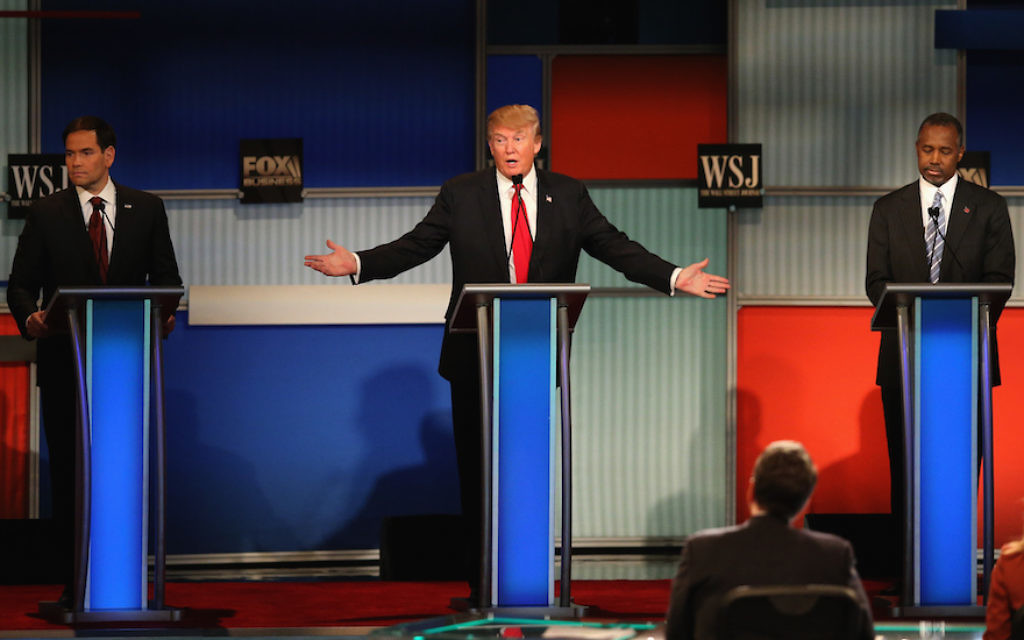 It’s going to be a long Thursday.

The Republican Jewish Coalition is holding a forum for GOP presidential candidates, and everyone’s invited. Well, everyone in the race. Even candidates who register as barely a blip on the national radar will get 30 minutes to make their case to an audience of hundreds of Republican Jews.

At long last, the country will hear from former Virginia Gov. Jim Gilmore, who hasn’t been invited on stage since the first debate. In all, 14 candidates will speak, meaning seven straight hours of talk. And that’s not counting the necessary breaks.

Matt Brooks, the RJC director, says the format is up to the speaker: Speak for the full 30 minutes, just dive into questions — or any mix thereof.

These encounters are not love fests. There are donors present, but grassroots activists pay the fee and come from far afield to ask the candidates questions, and although there will be plenty of softballs, expect a few beaners as well.

At Commentary, Tevi Troy, a former deputy health secretary in the George W. Bush administration, has justpublished a thorough history about how over the decades, the dance between politically conservative Jews and the GOP, awkward and guarded at first, has grown become increasingly intimate.

Brooks said that principally, the candidates will be asked how they plan to distinguish themselves from Hillary Rodham Clinton, the likely Democratic presidential nominee. Brooks has said her presidency would add up to a “third Obama term” for Israel, not a compliment in his circles.

However, he also said the Republican Jewish crowd, a constituency that has trended hawkish on foreign policy but moderate on social issues, will ask hard questions about some of the controversies that have dogged the race.

“You will see a sharp contrast on a number of key issues,” Brooks said. “There will be an opportunity to flesh out their positions in a way the debates don’t allow them to. We’ll be able to see firsthand how they stack up to the kishkes test, see what’s really in their hearts.”

Here then are nine questions the candidates may face:

I reported in April that much of the Jewish GOP establishment has lined up behind the latest Bush entering the race, partly because these folks hold his brother George W. in high regard — seeing him as the best friend Israel ever had in the Oval Office. Donor luminaries, including Florida’s Mel Sembler and Texas’ Fred Zeidman, pledged themselves to Bush, a former governor of Florida.

Six months later, Bush is tanking, unable to shuck the loser mantle Donald Trump, his billionaire businessman rival, placed around his neck early in the debates. Bush still has establishment backing, but if he takes questions, expect at least one to be about what he plans to do to pull out of single digits in the polls.

2. Marco Rubio, are you ready?

I was told in April that the establishment take on Sen. Marco Rubio of Florida was that at age 44 and with barely a U.S. Senate term under his belt, he was not ready for prime time. Yet he has risen steadily in the polls, and he has expanded his Jewish backing from his longtime patron, Florida car dealership baron Norman Braman, to include Paul Singer, the hedge funder who is deeply entrenched in pro-Israel giving. Is now his time to shine?

It would help if Sheldon Adelson decreed it so.

The billionaire casino magnate does not want to repeat what he now believes was a mistake in 2012 — backing dark horse Newt Gingrich, only to wound the then-front-runner, Mitt Romney, in the general election. So he’s kept mum so far about which horse he’ll back in 2016. On the other hand, he is said to strongly favor Rubio as the candidate with the right pro-Israel outlook likeliest to win. His Israeli newspaper, Israel Hayom, decided as long ago as April that it would be a Rubio-Clinton match. If Adelson is in attendance — and as the RJC’s major backer, the likelihood is he will be — will he finally show his hand?

Jewish Republicans appreciate a fighter, but they also want someone who will win in the general election. Expect Trump to field questions about whether he is ready to look presidential — i.e., ditch the curse words, the dog whistles and the mocking of the disabled.

Chinese troops are in Syria? The Nazis were gun control freaks? Brain surgeon Ben Carson has some explaining to do about his expertise outside of medicine. Republican Jews tend to emphasize foreign policy and drawing nuanced lessons from history in seeking their favored candidates.

Jewish Republicans are eager for the real race to get underway, and feel they can’t afford to be saddled by dead weight like Gilmore, former New York Gov. George Pataki and former Pennsylvania Sen. Rick Santorum — however much they may have admired these figures in the past.

6. But Lindsey Graham, could you be more wonderful?

Sen. Graham of South Carolina also is barely registering in the polls and seems to have been permanently consigned to the debate kiddy table, if he makes it to the meal at all. But his upfront pro-Israel policies and activism throughout his career make him a coddled son of the Republican Jewish establishment. Expect a warm reception.

At least three candidates — Trump, Sen. Ted Cruz of Texas and Sen. Rand Paul of Kentucky — have been guarded about committing to increased intervention in Syria. That could be a problem for a Republican Jewish base that argues that President Barack Obama has proven feckless in handling the collapse of order in that part of the Middle East.

8. Guys, we need Hispanics, so maybe tone it down?

It’s not a coincidence that Ari Fleischer, a former spokesman for the George W. Bush White House and an RJC board member, co-authored a scathing Republican national Committee report scoring the party for its poor performance among minorities in 2012. Republican Jews are now beloved, fully equal members of the GOP family, but it was not always so (see Troy, above.) Expect Trump and Cruz to field tough questions about their immigration rhetoric.

9. Can you stop talking about baby parts?

GOP Jews trend moderate on social issues, particularly on reproductive rights. Former Hewlett-Packard Carly Fiorina may get some scrutiny for her role in stirring up sentiment against Planned Parenthood, particularly in the wake of last week’s shooting at a Colorado clinic.