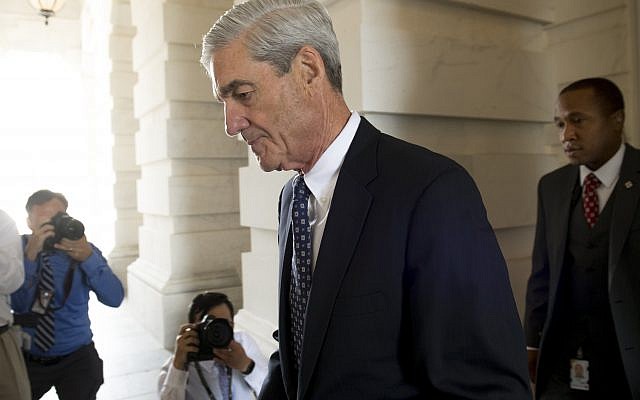 Robert Mueller, special counsel on the Russian investigation, leaves following a meeting with members of the Senate Judiciary Committee at the US Capitol, June 21, 2017. (Saul Loeb/AFP/Getty Images/via JTA)

WASHINGTON (JTA) — It looks like Robert Mueller, the special counsel investigating alleged improprieties associated with Donald Trump’s presidency and election campaign, is wrapping up his report.

Or maybe not. Mueller has over his near-two year run led a leak-free operation, and no one is saying on the record that the report is completed. Two weeks ago, according to the multiple media reports citing unnamed Justice Department officials, the word was that it would come out last week, and last week the word is that it will come out this week. And the Trump administration sources who are fueling the reports might have a vested interest in wanting Mueller to cut things short, now.

Not only that, but what we see of the report may be limited: Attorney General William Barr, under current department regulations, is required only to summarize the report for Congress, and he has suggested that he will not include in the report information that could be damaging to unindicted individuals. Topping that list is President Donald Trump, as department guidelines say that a sitting president may not be indicted.

Democrats have since Jan. 3 controlled the House of Representatives, and say they are ready to challenge rules that would restrict anything short of the full report being made public.

Nonetheless, as tight-lipped as Mueller has been, it’s possible to glean the thrust of his investigation from his multiple court filings, indictments and convictions. The Associated Press pulled together a narrative that suggests the outline of the report, and it isn’t good news for Trump. The AP outline depicts a campaign that was at least receptive to Russian interference in the 2016 campaign, and with some top-level officials (although as far as we know, not Trump himself), who were prone to lying about Russian interference.

There are major players on both sides — those implicated in the Mueller investigation, those who want to bring it all to light, and those who might be collaterally damaged — who are Jewish. Here are some Jewish players to watch for and possible outcomes once the report gets released.

The family: First, the good news…

Word is, Roger Stone, Trump’s longtime adviser, indicted in January for witness tampering and for lying to officials about his role in soliciting hacked Democratic Party emails, is Mueller’s last get. Members of Trump’s family, including son-in-law and adviser Jared Kushner, were no doubt relieved.

Other good news for Kushner: Mueller’s ambit would have included any alleged crimes related to Russian interference in the election. If he’s not prosecuting Kushner and Donald Trump Jr. for their role in the June 2016 meeting they took with a Russian lawyer with purported ties to the Kremlin who said she had dirt on Trump’s Democratic rival, Hillary Clinton, it’s likely no one will. The same goes for the meetings Kushner took during the transition with Russian officials.

Ditto for Kushner’s alleged role in getting his father-in-law to fire James Comey, the FBI director, in May of 2017. Mueller was reported to be considering whether that constituted an attempt to obstruct justice, as a means of killing the Russia inquiry. (In fact, it ended up spurring it forward: Comey’s departure led Rod Rosenstein, the deputy attorney general, to name Mueller to the special counsel post.)

…and then the bad news.

But Kushner’s relief could be short-lived. There are signs that Mueller may be delegating some prosecutions to other authorities. You’ll recall that Michael Cohen, Trump’s former lawyer, pleaded guilty to fraud and lying to Congress. Those cases, which got Cohen three years in jail, were prosecuted not by Mueller, but by federal prosecutors in the Southern District of New York. (In testimony to Congress last week, Cohen said Trump was a con man and a racist, and once again cited his father’s survival of the Holocaust to explain why he turned on Trump.)

Much else has come up over the last two years that could implicate Kushner and his wife Ivanka in the kinds of allegations that are not directly related to Russian interference in the election.

Kushner is Trump’s top point man in cultivating U.S. ties with Sunni Arab nations in the Persian Gulf — his family also owns a fortune-draining property at 666 Fifth Avenue in New York. Kushner has been seeking investors in those countries, as well as in Russia, to bail out the business. As a result, reports of possible conflicts of influence have dogged him. Mueller reportedly looked into Kushner’s alleged overtures to Russian investors.

The most recent news is that investors from Qatar, a country despised by much of the U.S. conservative establishment for its ties to Iran and to the Muslim Brotherhood, are helping to bail out the property. Kushner’s closest Middle Eastern ally, Saudi Crown Prince Mohammed bin Salman, has led a blockade against Qatar. Israeli interests also have invested in Kushner’s company. Reportedly, concerns over these multiple investments kept intelligence agencies from recommending that Kushner get the security clearance that usually comes with his status as a top presidential adviser.

Ivanka Trump might also not be spared fallout. One of Cohen’s guilty pleas is for lying to Congress about the extent of Trump’s efforts to build a flagship property in Moscow, well into his presidential campaign. Ivanka Trump reportedly was involved in planning the property.

The family’s friends and projects

If it emerges that prosecutors are looking into Kushner’s business associations or anything else unearthed by Mueller, there will be collateral damage.

Kushner is currently leading a six-nation tour of the Gulf to drum up support for his plan for Israeli-Palestinian peace. He won’t publish the deal until after the April 9 elections in Israel, in part not to influence their outcome.

The plan doesn’t have much of a chance in any case, without buy-in from the Palestinians, who are furious with Trump for recognizing Jerusalem as Israel’s capital. But what Trump once dubbed the “deal of the century” will be mortally wounded if Kushner gets into legal trouble. The Gulf leaders whose support he is now soliciting would be less likely to endorse a deal that would be unpopular on the Arab street. And Israeli hard-liners who already are wary of the deal, even with its details kept secret, would have a case to make that it is not worth pursuing absent Kushner’s advocacy.

Kushner has since his teens been close to Israeli Prime Minister Benjamin Netanyahu, who is fighting for his political life and who has banked on reelection in part on his closeness to Trump — a closeness brokered to a large extent by Kushner. If Kushner is out of the picture — especially if there is a development before April 9 — Netanyahu could be weakened politically.

Kushner more recently has formed a fast friendship with bin Salman, who for a time appeared preeminent in the stakes to succeed his father King Salman. Then, Mohammed bin Salman suffered internal political fallout for the gruesome murder last year of an exiled dissident, Jamal Khashoggi. The departure of his American patron would be another setback.

Much of the attention on foreign interference in the 2016 election has focused on Russia and its intelligence agencies. Psy-Group, an Israeli company made up of former Mossad agents has, reportedly, also taken credit for using psyops to manipulate social media and turn voters away from Clinton in 2016. It may be bluster, and so far, no indictments.

Post-election, three of the top lay officials at the Republican National Committee were Jewish. Like many such honorees, they won the spots for their fund-raising and other work in helping to elect Trump.

They were: Michael Cohen, one of its deputy finance chairmen, who is now going to jail; Eliott Broidy, another deputy finance chairman, reportedly under federal scrutiny for soliciting cash from foreign powers for access to the Trump administration; and Steve Wynn, the former casino magnate and RNC finance chairman. Wynn was forced out of his eponymous business because of sexual assault allegations, and last year was said to be cooperating with the Justice Department in the Broidy investigation.

All three are no longer associated with the RNC.

David Pecker, the National Enquirer publisher, got immunity last year for assisting in the prosecution of Cohen: Pecker dished to feds about the Enquirer’s role in Cohen’s pay-offs to the adult film actresses who are alleged to have had affairs with Trump. Pecker last month got into trouble again now for an alleged extortion attempt targeting Washington Post owner Jeff Bezos. Southern District of New York prosecutors are now considering whether Pecker voided his immunity deal.

Democrats won the U.S. House of Representatives in November and have made no bones about using their subpoena power to investigate whatever Mueller chooses not to prosecute.

Of the 20 or so House committees, six will be at the forefront of the Trump investigations — Oversight, Judiciary, Foreign Affairs, Intelligence, Financial Services, and Ways and Means. Chairmen of all six committees wrote Barr, the attorney general, last month, demanding the release of the full Mueller report. Three of the chairmen are Jewish:

*Adam Schiff of California heads the Intelligence Committee and wants to reopen investigations into the extent of Russian involvement in the Trump campaign;

*Eliot Engel of New York heads Foreign Affairs, and wants to probe the degree to which Trump’s current Russia policy is tainted by any past associations; this week, he joined Schiff and Oversight chairman Elijah Cummings in requesting “documents and interviews with White House and State Department personnel related to communications between Trump and Putin.”

*Jerry Nadler heads the Judiciary Committee and is the lawmaker who will decide whether any information gleaned in hearings rises to the level of high crimes and misdemeanors that would merit Trump’s impeachment. This week, he demanded documents from 81 indivudals, agencies and businesses as part of a probe of allegations of Trump administration corruption.