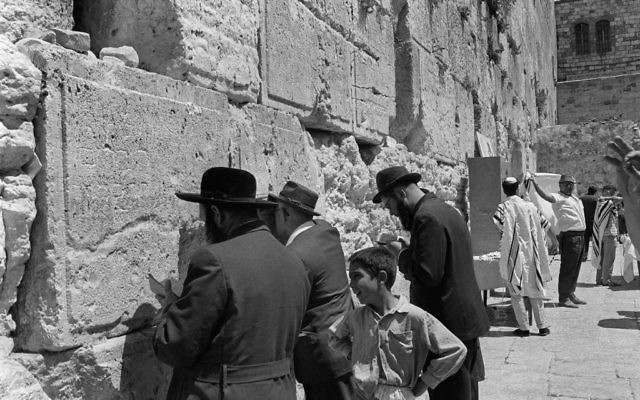 Ultra-orthodox Jews pray 09 June 1967 at the Wailing Wall in Jerusalem after the IDF conquered over Jordan the eastern part of the Holy City. Getty Images

Yeshiva HaKotel, a prominent Zionist institution, is founded in the Old City.

1968
A terrorist bombing in the Mahane Yehuda open-air market kills 12
people and injures 52.

1969
Members of the Popular Front for the Liberation of Palestine terrorist organization bomb a Jerusalem supermarket; two Israelis are killed and 20 are injured.

The Al-Aqsa mosque on the Temple Mount is damaged by arson committed by a Protestant extremist from Australia.

1971
The Shalom Hartman Institute, a pluralistic research and education institute, is founded

1972
Canadian singer-composer Leonard Cohen, during a concert at the Yad Eliahu Sports Palace at the end of a world tour, has a meltdown on stage, walking off, then returning after a cigarette and quick shave.

1973
OCTOBER: Jerusalem is on high alert during the Yom Kippur War on the Syrian and Egyptian fronts.

The Jerusalem Cinematheque theater and film archive is founded.

1974
Archbishop Hilarion Capucci, head of the Greek Catholic Church in Jerusalem, is arrested and charged with using his Mercedes sedan to smuggle arms to Palestinian terrorists.

Jerusalem is struck for the first time by missiles, a pair of Czech-made Katyusha rockets fired by Arab terrorists, landing 500 yards from the Knesset.

1977
NOVEMBER: Egyptian President Anwar Sadat makes a historic visit to Israel, addressing the Knesset, where he calls for Israeli withdrawal from “occupied” Arab land and the establishment of a Palestinian state.

1979
The Hebrew University returns to its rebuilt pre-1948 campus on Mount Scopus.

The Eurovision Song Contest is held in Jerusalem. The Milk and Honey singing group wins with “Hallelujah.”

1980
The International Christian Embassy is founded by evangelical Christians to express their support for Israel and the Jewish people.

The Knesset passes the “Basic Law: Jerusalem, Capital of Israel,” which declares that the city will remain unified in the borders that the Israeli government determined following the Six-Day War.

1981
Some 6,000 people attend The World Gathering of Jewish Holocaust Survivors.

1982
An Israeli soldier with an automatic rifle shoots his way into the Dome of the Rock on the Temple Mount, spraying the inside of the mosque with gunfire, killing at least two Arabs and wounding nine.

1983
Bob (Zimmerman) Dylan visits the Western Wall on the day of his son’s bar mitzvah.

The Midrachov pedestrian mall is established downtown, at the corners of Jaffa Road, King George Street and Zion Square.

1984
A terrorist kills two students at the Cremisan Monastery in Jerusalem.

1986
John Demjanjuk, an accused Nazi war criminal (aka Ivan the Terrible) living in Cleveland, is deported to Israel, going on trial at the Jerusalem District Court.

1987
DECEMBER: The first Palestinian intifada uprising starts at the Jabalia refugee camp in Gaza and spreads to the West Bank and Jerusalem.

1988
The Women of the Wall hold their first prayer service — disrupted, as in later years, by charedi Jews — at the Western Wall.

John Demjanjuk is found “unhesitatingly and with utter conviction” guilty of all charges, and is sentenced to death.
Michel Sabbah is consecrated as Roman Catholic Bishop of Jerusalem, becoming the first Palestinian Arab to hold this position.

The Temple Mount riots, Arabs protesting Jewish worship, result in the death of more than 20 Palestinians and the injury of 150.

A new City Hall, located in the Safra Square, opens.

The Tisch Family Zoological Gardens, better-known as the Jerusalem Biblical Zoo, opens in the Malha neighborhood.

1994
Palestinian terrorists armed with automatic rifles and grenades open fire in the Nahalat Shiva neighborhood, killing an Israeli soldier and an Israeli Arab and wounding at least 13 others.

1996
A Jerusalem 3000 celebration marks the “trimillennium” of the capital, centered in the City of David outside the Old City walls.

Palestinians throw stones and bottles at police to protest the opening of a controversial tunnel in the Old City that links the Western Wall and the Via Dolorosa.

1999
The Eurovision Song Contest is held in Jerusalem.

The Kraft Family Stadium opens in the center of Jerusalem as a venue for immigrants to play their U.S.-brand of football.

Teddy Stadium, named for Teddy Kollek, opens in south Jerusalem as a site for soccer games and concerts.

2000
SEPTEMBER: Likud Party leader Ariel Sharon makes a highly visible visit to the Temple Mount, to demonstrate Jewish sovereignty. The PLO uses it as a pretense to start the second intifada uprising.

The Belz Great Synagogue, the largest Jewish house of worship in the country, opens in the Kiryat Belz neighborhood.

2008
An Arab resident of east Jerusalem carries out a bulldozer attack on Jaffa Road, killing three people and wounding at least 30.

At Mahane Yehuda, a Guinness record in hummus consumption is set, from a plate with a 3.8-yards diameter.

UNESCO and the Arab League sponsor an Al-Quds Arab Capital of Culture program to promote Arab culture and encourage cooperation in the Arab world.

Videos of an alleged UFO in the skies above Jerusalem take the Internet by storm. The hoax purportedly depicts a glowing, unidentified object that slowly descends from the sky and hovers directly above the Dome of the Rock.

2013
The site of Jerusalem’s former railroad station reopens as HaTakhana HaRishona (“The First Station”), a culture and entertainment venue.

2015
Part of an ancient aqueduct built more than 2,000 years ago to transport water into the city of Jerusalem is uncovered during a construction project.

Six people are stabbed at the Jerusalem gay pride parade.

Hapoel Jerusalem for the first time wins the Israel State Championship in basketball.

Donald Trump, Republican candidate for president, pledges that, if elected, he will move the U.S. embassy in Israel from Tel Aviv to Jerusalem.

Archaeologists uncover the remnants of an impressive fort built more than 2,000 years ago by Greeks in the center of old Jerusalem. The ruins are the first solid evidence of an era in which Hellenistic culture held sway here.

An Israeli Arab drives a truck into a group of soldiers in the East Talpiot neighborhood, killing four and injuring 15.