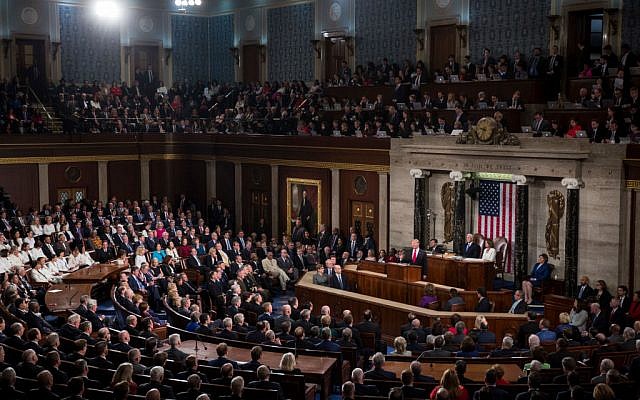 President Donald Trump delivers the State of the Union address in the chamber of the U.S. House of Representatives at the U.S. Capitol Building on February 5, 2019 in Washington, DC. Getty Images

WASHINGTON (JTA) — President Donald Trump linked his actions on Iran to the Pittsburgh synagogue massacre, pivoting during his State of the Union address from his decision to pull out of the Iran nuclear deal to a declaration that anti-Semitism must be confronted “anywhere and everywhere it occurs.”

Trump also bookended his speech with references to D-Day, including salutes to troops, among them Jewish American veterans, who helped liberate Europe, and Holocaust survivors who were liberated thanks to the American-led action. The salutes earned standing ovations.

“My administration has acted decisively to confront the world’s leading state sponsor of terror: the radical regime in Iran,” Trump said Tuesday evening, delivering his address in the U.S. House of Representatives.

“They do bad, bad things. To ensure this corrupt dictatorship never acquires nuclear weapons, I withdrew the United States from the disastrous Iran nuclear deal,” he said, referring to the 2015 sanctions-relief-for-nuclear-rollback agreement negotiated under President Barack Obama. “And last fall, we put in place the toughest sanctions ever imposed by us on a country.

“We will not avert our eyes from a regime that chants death to America and threatens genocide against the Jewish people,” he continued, to applause, mostly from the Republican side. “We must never ignore the vile poison of anti-Semitism, or those who spread its venomous creed. With one voice, we must confront this hatred anywhere and everywhere it occurs. Just months ago, 11 Jewish-Americans were viciously murdered in an anti-Semitic attack on the Tree of Life Synagogue in Pittsburgh.”

The October 2018 shooting, in which 11 people died, was the worst attack on Jews in American history. It was carried out by a man shouting anti-Semitic epithets, and appears to have been principally motivated by hatred of pro-immigration policies favored by HIAS, a Jewish immigration advocacy group. The alleged attacker bought into the notion that migrants from Mexico pose a national security threat, a theme also favored by Trump, who devoted much of his speech Tuesday night to securing the border. There’s no evidence that the attack was related in any way to the Middle East.

Trump saluted a police officer, Timothy Matson, shot while chasing down the Pittsburgh assailant, as well as a survivor of the Tree of Life attack he had invited as a guest, Judah Samet, a Holocaust survivor. “Not only did Judah narrowly escape death last fall — more than seven decades ago, he narrowly survived the Nazi concentration camps,” said Trump. 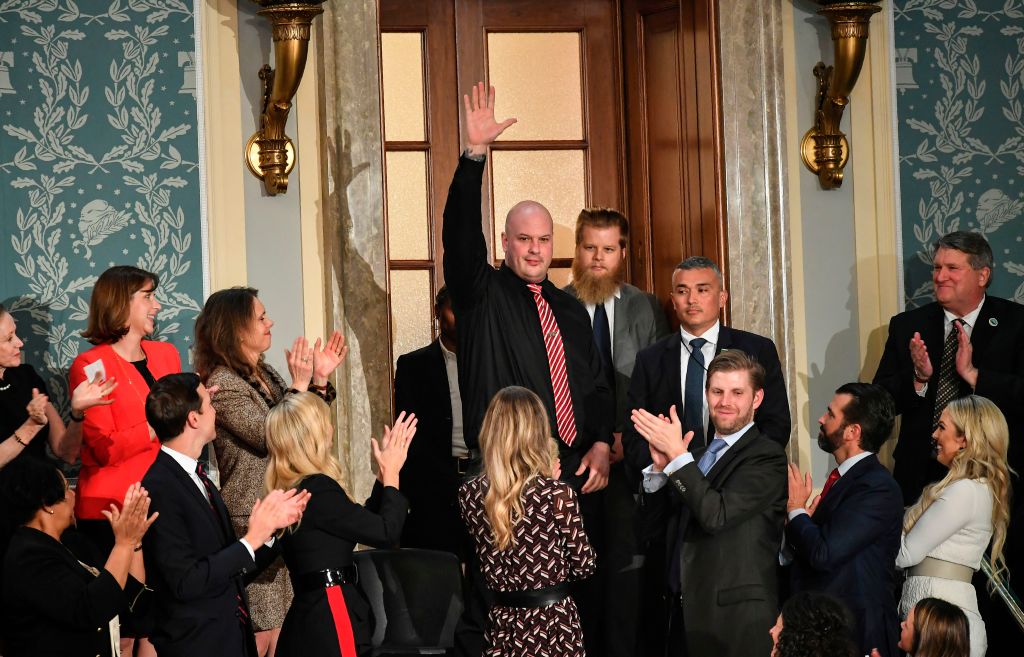 Special guest of President Timothy Matson (C), surrounded by Trump family members, is acknowledged by the audience during US President Donald Trump’s State of the Union address at the US Capitol in Washington, DC on February 5, 2019. Getty Images

Matson and Samet, whose 81st birthday was Tuesday, earned long standing ovations from members of both parties, and the lawmakers sang “Happy Birthday To You” to Samet, while Trump chuckled and mock-conducted. “They wouldn’t do that for me, Judah,” Trump said.

Honoring WWII rescuers and the rescued

Trump also saluted three World War veterans he had invited. Irving Locker, Joseph Reilly and Herman Zeitchik were among the forces who landed in France in 1944 on D-Day, the U.S.-led invasion that cost tens of thousands of lives but turned the tide of war against Nazi Germany and its allies.

Of the three, two — Zeitchik and Locker — are Jewish and have spoken about the experience of liberating Europe from forces that had targeted Jews for genocide.

Trump also saluted a Holocaust survivor and Israeli army veteran he had invited to attend the speech, Joshua Kaufman, and linked Kaufman’s story to those of the veterans.

“Joshua Kaufman was a prisoner at Dachau Concentration Camp,” Trump said. “He remembers watching through a hole in the wall of a cattle car as American soldiers rolled in with tanks. ‘To me,’ Joshua recalls, ‘the American soldiers were proof that God exists, and they came down from the sky.’ 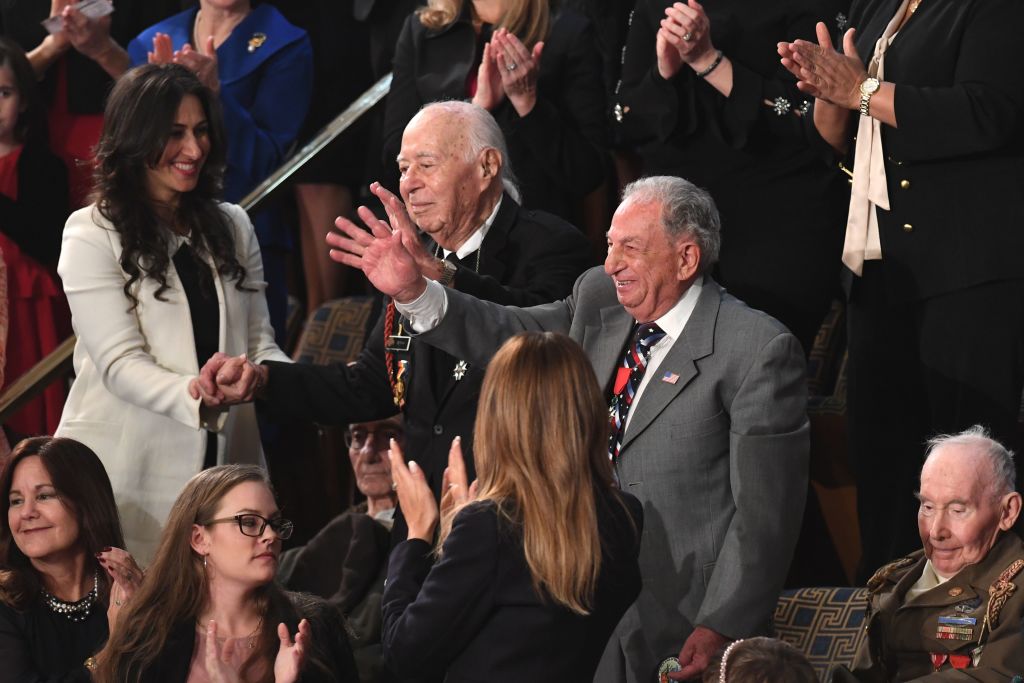 Special guests WWII veterans Joseph Reilly (seated), Irving Locker (C) and Herman Zeitchik are acknowledged during the State of the Union address at the US Capitol in Washington, DC, on February 5, 2019. Getty Images

“I began this evening by honoring three soldiers who fought on D-Day in the Second World War,” Trump continued. “One of them was Herman Zeitchik. But there is more to Herman’s story. A year after he stormed the beaches of Normandy, Herman was one of the American soldiers who helped liberate Dachau.” Zeitchik stood up to extended applause.

“He was one of the Americans who helped rescue Joshua from that hell on earth,” Trump said. ” Almost 75 years later, Herman and Joshua are both together in the gallery tonight — seated side-by-side, here in the home of American freedom.”

“Herman and Joshua, your presence this evening is very much appreciated,” Trump said and once again, there was extended applause.

Trump, reviewing his foreign policy, noted his decision to move the U.S. Embassy to Jerusalem, and described it as of a piece with his realist approach, which has also dictated his retreat from treaties and alliances. In his 2018 address, he also boasted of recognizing Jerusalem as Israel’s capital, which paved the way for the embassy move.

“Our approach is based on principled realism — not discredited theories that have failed for decades to yield progress,” Trump said Tuesday. “For this reason, my Administration recognized the true capital of Israel — and proudly opened the American Embassy in Jerusalem.” 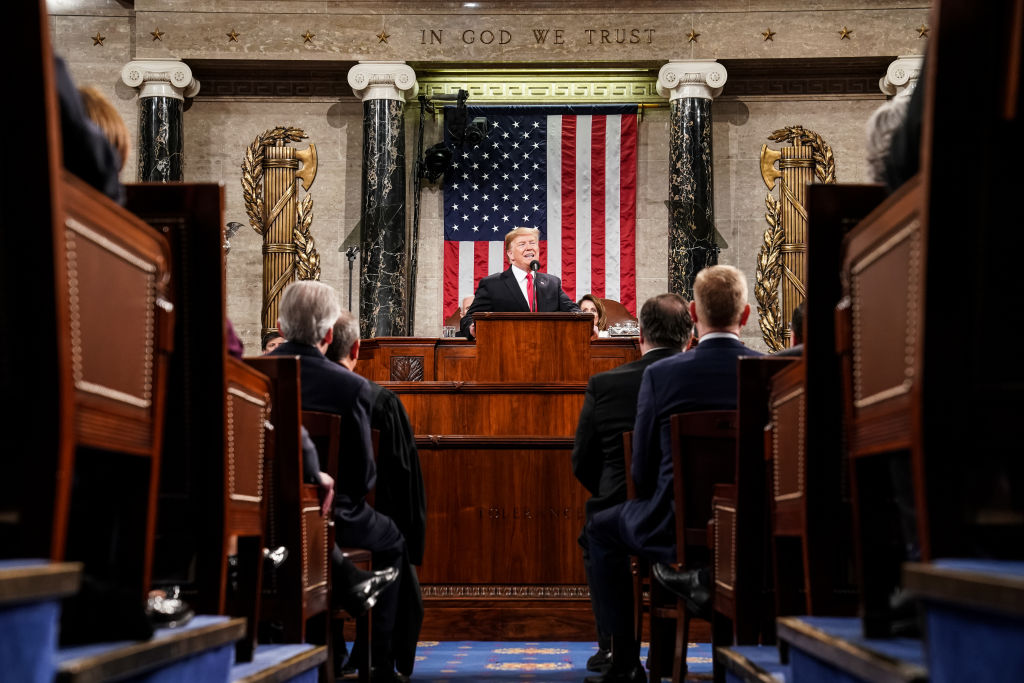 President Trump’s second State of the Union address was postponed one week due to the partial government shutdown. Getty Images

The reaction was … unsurprising

Reacting to the 90-minute speech, HIAS was polite but also quick to point out where their agenda differed with Trump’s.

Melanie Nezer, senior vice president of public affairs at HIAS, said in a statement that “Stories of Holocaust survivors are reminders that we should welcome the stranger and protect the refugee.

“Making the U.S. great means upholding our commitment to international law and asylum seekers,” she continued. “Blocking people from applying at ports of entry and forcing asylum seekers at our southern border to remain in Mexico to await their hearing is illegal, dangerous and unprecedented in American history. The greatness of America is in our diversity. America is great when it can be a safe haven from war, violence, persecution and disaster. America has a moral duty to be that safe haven.”

Liberal groups were unimpressed. “His invocation of Jewish victims of the Holocaust and the Tree of Life massacre rings hollow when he has consistently utilized antisemitic tropes, such as his campaign ads denouncing ‘globalists’ and espousing conspiracy theories about George Soros, all while advancing a white nationalism that puts Jews and so many other Americans in danger,” said Ginna Green, Chief Strategy Officer of Bend the Arc: Jewish Action, in a statement. 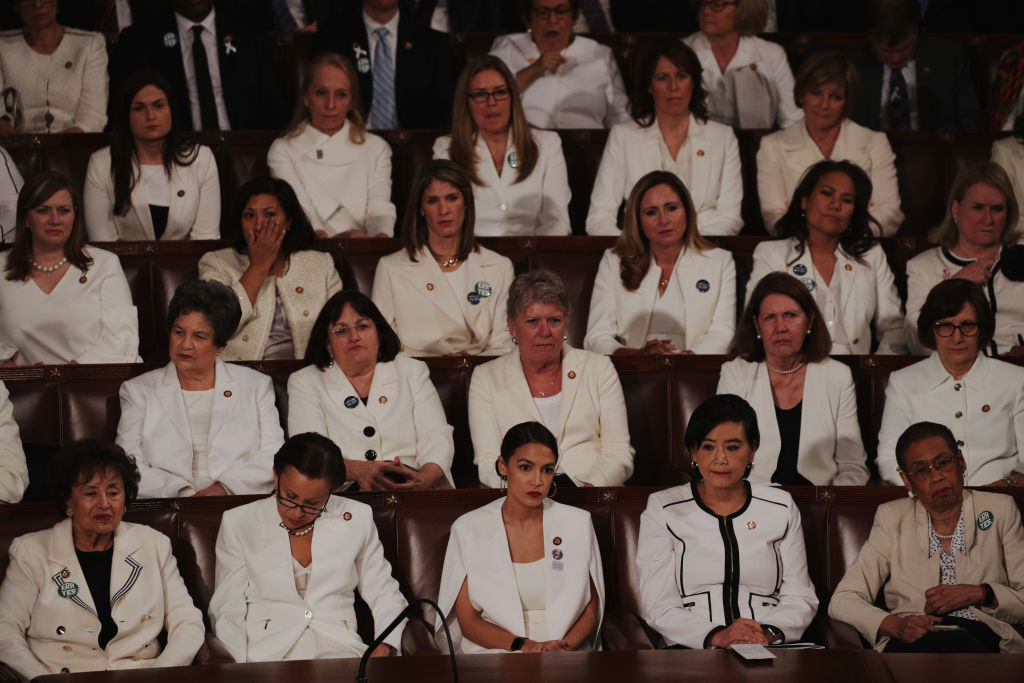 Female lawmakers dressed in white watch as President Donald Trump delivers the State of the Union address in the chamber of the U.S. House of Representatives at the U.S. Capitol Building on February 5, 2019 in Washington, DC. A group of female Democratic lawmakers chose to wear white to the speech in solidarity with women and a nod to the suffragette movement. Getty Images

“Tonight was a missed opportunity for the president to lead and unify the country after a painful period of obstruction and a 35-day government shutdown,” said Halie Soifer, executive director of the Jewish Democratic Council of America. “There is no onslaught of immigrants or security crisis on our southern border, and the U.S. military must not be used for political purposes.”

The Republican Jewish Coalition, by contrast, said Trump’s choices for guests sent clear and welcome messages. “President Trump honored Americans who have displayed resilience, courage, and love of freedom,” an RJC statement read. “Democrats used their guest invitations to highlight radical positions their base wants to hear, but which are out of step with mainstream America on things like transgender issues, climate change activism, ‘open borders’ immigration reforms, gun control, and the ‘resistance.’”

Among the guests invited by Democratic lawmakers were a sexual assault survivor, a climate change scientist, a Liberian refugee, an Iraqi-born chemist for the Environmental Protection Agency, the parents of gun violence victims and an undocumented immigrant who worked at Trump’s New Jersey golf resort.