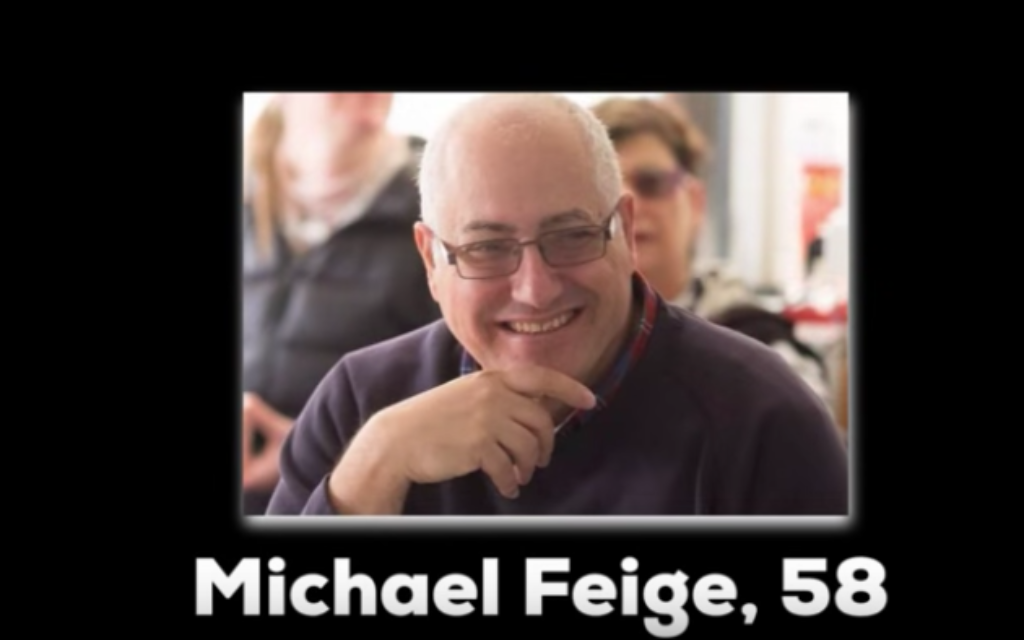 JERUSALEM (JTA) — Michael Feige, a sociologist and anthropologist specializing in Israeli society, was among the four victims being mourned in the aftermath of Wednesday night’s terror attack in Tel Aviv.

Feige, 58, a professor in the Israel studies program at Ben-Gurion University of the Negev, was in a restaurant at the Sarona Market, a popular spot in the central part of the city, when he was shot dead.

Remembering Feige, members of the H-Judaic Jewish Studies Network called him “a creative scholar, an engaging teacher, and a beloved human being.”

Ilan Troen, a professor at Ben-Gurion University and Brandeis University in suburban Boston, said Feige was “a gentle man and a sensitive teacher.”

Feige, who lived with his wife and three daughters in Givatayim, near Tel Aviv, was perhaps best known for the 2009 book “Settling in the Hearts: Fundamentalism, Time and Space in the Occupied Territories,” published by Wayne State University Press. He had written several articles against the Israeli occupation of the Palestinians.

He also published in Hebrew the book “One Space, Two Places: Gush Emunim, Peace Now and the Construction of Israeli Space,” published in Jerusalem by Magnes Press in 2002.

His daughter is to be married soon, according to The Times of Israel.

Troen said in a statement that Feige was engaged in original research on the settlement movement and Gush Emunim, as well as on Peace Now, the use of archaeology in contemporary Israel, the assassination of Prime Minister Yitzhak Rabin and religious fundamentalism, and the place of David Ben-Gurion in national memory.

Feige spent a year as a fellow of the Katz Center for Advanced Judaic Studies at the University of Pennsylvania before returning to Israel, where he joined the Ben-Gurion Research Center for the Study of Israel and Zionism at the Ben-Gurion University campus in Sde Boker. He was serving as the head of the BGU program in Israel studies.

Ben Ari was eating at a restaurant with his wife and two children when the attack occurred; his wife was among the injured. He worked in a senior position with Coca-Cola and had served in the Israeli army’s elite Sayeret Matkal unit. Ben Ari was a cousin by marriage of Forward contributing editor David Hazony.

“He was a reservist, received a commendation from the president, was the salt of the earth, a charming father and wonderful brother,” his sister, Reut, told Ynet.

Mishayev was waiting for her fiancé to arrive when the attack occurred. She reportedly called her husband-to-be after she was shot and before she died.

Navaa is survived by her husband, four daughters and her parents.

The attackers were 21-year-old cousins from the Palestinian town of Yatta in the Hebron Hills in the southern West Bank. One was shot and killed at the scene. The other remains in serious condition in the same Tel Aviv hospital as the victims.

In the hours following the attack, Israel’s Defense Ministry rescinded all of the tens of thousands of permits given to Palestinians in the West Bank and Gaza Strip that would have permitted them to visit family in Israel or the Old City of Jerusalem and pray at the Al-Aqsa mosque in honor of the holy Muslim month of Ramadan. Some 83,000 such permits were canceled, the Defense Ministry’s coordinator for government activities in the territories told the Israeli media.