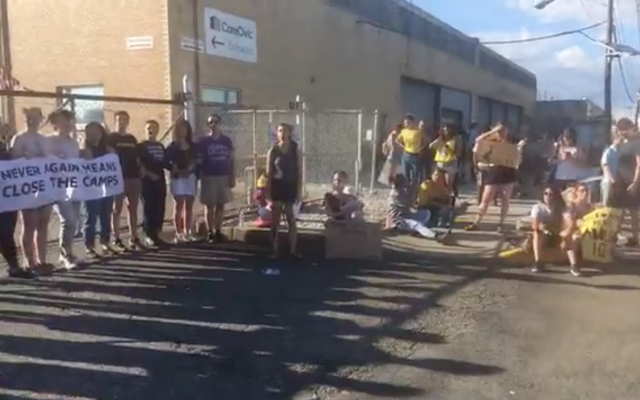 Hundreds of people attended a protest outside of an ICE facility in Elizabeth, N.J. on Sunday, June 30, organized by a new Jewish group called Never Again Action. (Screenshot from Facebook via JTA)

NEW YORK (JTA) — Thirty-six Jews have been arrested at a protest in front of an Immigration and Customs Enforcement detention center in Elizabeth, New Jersey.

The arrest on Sunday afternoon happened at the end of the protest outside of the Elizabeth Contract Detention Facility, organized by a new Jewish group called Never Again Action. Hundreds of Jews, mostly young people, attended the protest. Many of Never Again Action’s leaders are also involved with IfNotNow, a millennial Jewish group that opposes Israel’s occupation of the West Bank.

Also deserving of our attention and support: 36 young Jewish activists were arrested today for nonviolent direct action against migrant conditions in Elizabeth, NJ.

You can learn more about their advocacy and support their bail fund here ⬇️ https://t.co/oyoOJZdwh8

The crowd chanted “Hey hey, ho ho, racist ICE has got to go” and held signs reading “Never again means close the camps” and displaying the group’s name, according to video of the event on Facebook.

“As Jews, we cannot sit and watch as ICE terrorizes immigrant families, separating children from their parents and detain[ing] them in deplorable conditions,” read a Facebook post by Never Again Action. “As Jews, we know that #NeverAgainIsNow.”

The group’s name comes from the slogan “Never again,” which has historically been used in relation to Holocaust commemoration. Jewish groups on the left have compared ICE’s treatment of undocumented immigrants to abuses under the Nazis and other totalitarian regimes, while other Jewish groups have said that comparisons of ICE to Nazi Germany and the Holocaust are inappropriate.