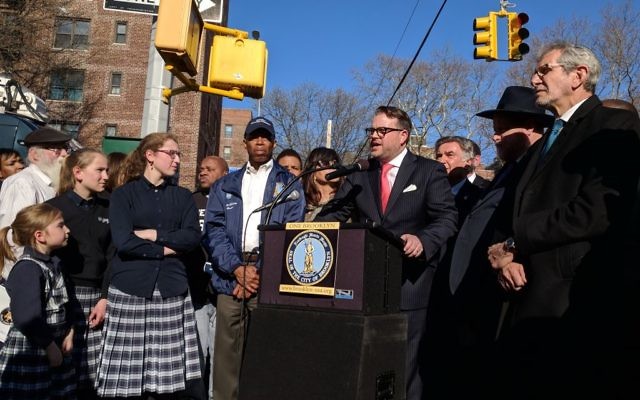 At the press conference in Crown Heights, Brooklyn on April 23, 2018. Amy Sara Clark/JW

(JTA) — Three men were charged with hate crimes for attacks on identifiably Jewish men in the Crown Heights section of Brooklyn.

They appeared in a Brooklyn courtroom on Friday.

The men are identified as Nazar Walters, 18, Teshon Bannister, 21, and Joshua Peters, 20.

“We allege that this senseless and violent attack was motivated by bias and are determined to hold the defendants accountable,” Brooklyn DA Eric Gonzalez said in a statement. “We must all stand up against the proliferation of hate crimes and work with all communities to promote tolerance and unity.”

One captured by a surveillance camera shows three assailants knocking over a Hasidic Jewish man before punching and kicking him. The victim, 51, required hospitalization for his injuries, the Post reported.

A 22-year-old yeshiva student from Australia identified as Mendel was the second victim.

“They didn’t say anything at all,” Mendel told the Post. “Next thing I know, I was on the floor — my yarmulke and glasses in the gutter somewhere.”

The attackers did not rob their victims.

The NYPD told local media that anti-Semitic hate crimes in the city are rising. Last year at this time, 13 people were attacked. This year, the number increased to 20, Fox5 NY reported.

#HappeningNow great response and #Collaboration by @NYPD71Pct and our Vol two under arrest for vicious assault. One outstanding Perp at this time #TeamWork pic.twitter.com/Jzfdq570WP