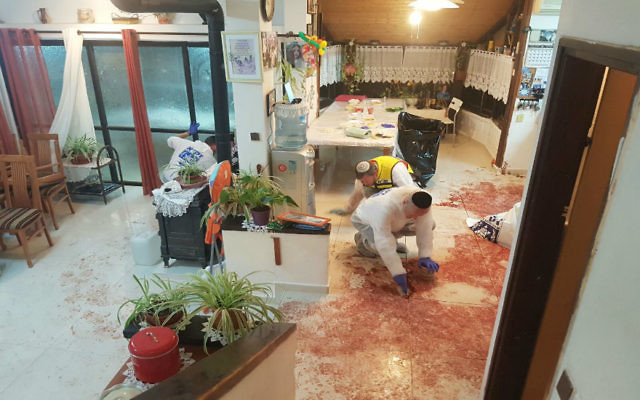 The scene of the stabbing attack in the Halamish settlement in the West Bank, that killed 3 and injured one. JTA

Three Israelis were killed and one wounded in a stabbing attack in a West Bank settlement north of Ramallah.

The three victims were named on Saturday after Shabbat: Yosef Salomon, 70, his daughter Chaya Salomon, 46, and son Elad Salomon, 36.

The mother, Tova, 68, was taken to Shaare Zedek Medical Center in Jerusalem in serious condition. Israeli media reports said the attacker was shot but survived.

IDF forces raided the home of the 19-year-old Palestinian terrorist Saturday morning, and arrested his brother, Times of Israel reported.

Israel TV’s Channel 10 said the assailant, who entered the home of victims, was in his late teens and had posted on Facebook that he was upset by events at Jerusalem’s Temple Mount, where Palestinians and Israeli security forces clashed this week over the Israeli government’s decision to keep in place indefinitely metal detectors at the entrance to the Temple Mount.

Eli Bin, the head of Israel’s rescue service Magen David Adom, said an off-duty soldier next door heard screams, rushed to the home and shot the attacker through a window, according to ABC News. Bin said the attacker was wounded and evacuated to hospital.

In a statement released shortly after the end of shabbat, Israel’s prime minister said that the country’s security forces would “take all necessary measures” to maintain security.

“[The attack] was an act of terrorism committed by a reprehensible person incited by wild hatred,” Benjamin Netanyahu said.

Israel’s President Reuven Rivlin in a statement issued Saturday night said: “At this difficult time our hearts go out to the bereaved family in Halamish, and to all the community there, after the incomprehensible loss they have endured last night.  The difficult pictures, and the thoughts of the children who fled for shelter now dealing with the terrible news – it is truly heartbreaking. 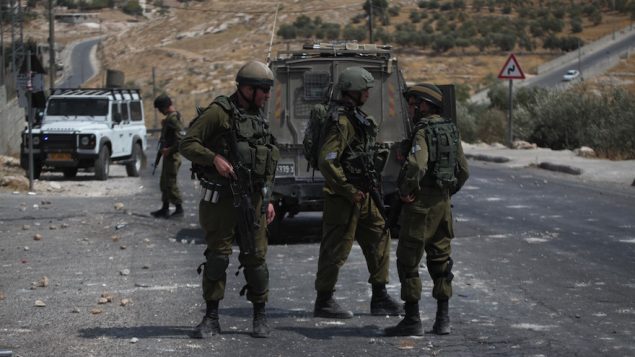 Israeli forces dealt with another stabbing attack in Takku neighborhood of Bethlehem in the West Bank on July 20, 2017. JTA

Rivlin expressed his appreciation for Israel’s security forces, saying: “I know that we will show no tolerance for those who plot against us, and we will fight terrorism, mercilessly and without compromise.”

Israel braced for more violence Saturday night as the Palestinian Authority’s ruling Fatah party called for a continued struggle “to take control of the Al-Aqsa mosque.”

PA President Mahmoud Abbas, who on Friday broke off all contact with the Israeli government, said the “campaign for Jerusalem has effectively begun, and will not stop until a Palestinian victory and the release of the holy sites from Israeli occupation,” the Walla news site reported.

On Friday, three Palestinians reportedly were killed in clashes between rioters and police in Jerusalem and the West Bank. Six Israeli police officers were injured in the rioting, touched off after Israel installed metal detectors at the Temple Mount in response to a July 14 terrorist shooting near the holy site that killed two Israeli police officers. The previous night, some 42 people were wounded in clashes between security forces and Palestinian protesters, who rioted during rallies against the introduction of the metal detectors, Army Radio reported.

The Temple Mount compound contains the Haram al Sharif area that is holy to Muslims.