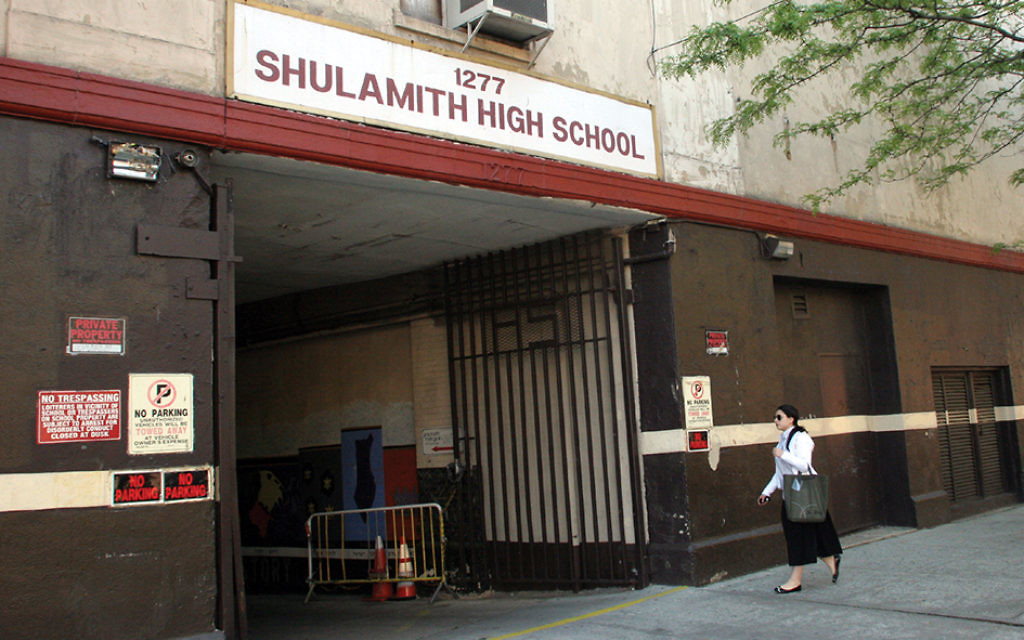 You could call them The Shulamith 29 — a group of Orthodox women teachers who filed a lawsuit asserting that Shulamith School for Girls, a preschool through 12th grade Orthodox school for girls, has for years owed them eight months’ worth of unpaid back salary. As a result, the women, themselves Orthodox, say they have been harassed by school and rabbinic officials and told that they are breaking Jewish law by seeking redress through civil, rather than religious, courts.

The school, through its attorney, insists that in recent weeks the women have been paid the back wages and are being manipulated by an attorney seeking an inappropriately large payoff for his efforts on their behalf.

Now, the lawsuit that has dragged on in the Kings County Supreme Court for four years is coming to a head as the teachers, who say they were only paid part of their wages, seek to collect the rest, as well as interest and attorney’s fees and penalties resulting from the suit. Three former plaintiffs have since accepted payment and do not intend to pursue the case further, according to their attorney.

The remaining plaintiffs, most of whom live within the observant Midwood community, say that though reluctant to go public, they felt the impasse had dragged on too long and it was time to take action.

The story, rife with religious politics, focuses on one of the first Orthodox girls’ schools in the country, founded in Borough Park in 1930 and boasting a top academic reputation. The school moved to Midwood in the 1950s.

Nearly a decade ago, as the Midwood neighborhood demographics underwent rapid change, the school ran into financial difficulties. The local Orthodox community was moving rightward of Shulamith, which views itself as centrist, and Sephardic Jews were moving to the area but sending their children to Sephardic-run schools. Enrollment was down significantly.

Despite bitter protests from parents, school administrators decided to sell the Brooklyn building in 2010. The property, originally the site of a silent-film production company, Vitagraph Studios, sold for $20 million. Assets were intended to bolster the school’s Long Island branch, which opened in 2000 and was patronized by the community’s burgeoning Modern Orthodox population.

A downsized version of the once 1,000-student strong school remained open in Brooklyn, though the two Shulamiths say they are separate entities with separate boards.

Amidst the financial upheaval and reorganization of six years ago, the administration suspended pay to 80 teachers, mostly women, without warning, for eight months, from April through November. (These facts are not disputed by Shulamith officials.)

During that time, teachers lost pensions and health care benefits, some buckled under mortgage payments, and ran up crushing credit card debts to pay tuition bills and keep up with the expenses of daily life, according to several plaintiffs.

“Two friends of mine lost their houses. One teacher wasn’t able to pay for her child’s wedding. The few of us who had pension plans lost those,” said Shoshana Kimmel, a science teacher at Shulamith for 30 years and plaintiff in the case. (She plans to retire as of this September.) One teacher who had cancer and was undergoing chemotherapy at the time found out her insurance plan had been cut when she arrived for a treatment and her medical claims were denied, Kimmel said. The teacher later discovered that the school had dissolved the staff health insurance plan without notice, despite continuing to deduct monthly premiums. (The teacher has since died.)

Despite repeated promises by school administrators that the teachers would be paid after the building was sold — and an agreement to hold $1 million from the $20 million sale in escrow for that specific purpose — staff members were left empty-handed.

“Even though we stopped getting paid, we kept going to work,” said plaintiff Barbara Stern, who taught English at Shulamith for 10 years. “We didn’t want to take it out on the kids by not showing up to class, or not filing their grades. I guess we were hoping the attorney general would step in if the situation kept up, but nobody stepped in.”

She said she and other plaintiffs were afraid to speak out publicly because of what she described as “underhanded” dealings by those who sided with the school.

“I don’t know what they’re going to post online about me — what they could make up, how they could viciously attack me,” she said in a telephone interview. “At this point, nothing is beneath them.”

What finally convinced Stern and the other plaintiffs to speak publicly about the case, she said, was when Rabbi Perry Tirschwell, executive director of Shulamith and designated by the school’s board to represent the school at an April 27 court hearing, unexpectedly nixed a settlement agreement that apparently had been signed by a judge and agreed to by the plaintiffs. It totaled $550,000. Rabbi Tirschwell later clarified that he was in favor of the settlement.

According to the school’s attorney, the settlement agreement was “tentative and subject to verifying the numbers.”

The amount, described as modest by several of the teachers, was intended by the plaintiffs to cover the unpaid wages from 2010 (an amount that comes to $294,827.31 according to Shulamith’s records), as well as accrued interest on the unpaid wages, statutory penalties equal to 100 percent of the unpaid wages, and four years of attorney’s fees.

“Shulamith has, again, broken its promise to pay,” said the plaintiffs’ attorney, Steven Landy, who called the school’s conduct “inexcusable.”

But Shulamith’s attorney, Robert Tolchin, who began representing the school in July and was designated as spokesman for school officials, offers quite a different version of events. “The teachers have already been paid,” he said, referring to a sum of $312,000, including payroll taxes, that was distributed by the school into the bank accounts of the individual plaintiffs last month without their prior knowledge.

The plaintiffs interviewed said they were surprised and confused by the transaction, and asserted that the deposits that they discovered in their accounts fell short of the wages they were owed and did not include four years’ worth of attorney’s fees or accrued interest or penalties for the long-unpaid wages.

Tolchin countered that “our moral responsibility is only to pay what was owed, not to be extorted and pay people to go away.”

He said the long delay was the result of protracted negotiations over the sale of the Brooklyn campus, and, more recently, he said, the plaintiffs’ decision to hire an attorney he describes as “obstreperous” and who slowed the process. According to the plaintiffs, the attorney in question stands to receive 25 percent of the final amount paid by the school, a sum Tolchin called excessive.

(In New York, contingent fee arrangements generally range from 10 to 35 percent, according to a legal expert.)

Last week the motion to enforce the settlement was scheduled for oral argument in court. But in response to a request from Shulamith’s attorneys the motion has been adjourned to September.

The fact that the case is being decided in civil court rather than religious court is itself a matter of bitter dispute.

A letter faxed to teachers in May 2011 singled out the lead plaintiff, Michelle Mond, for taking the case to “secular court.”

“Please realize that these actions are entirely inconsistent with halacha, and it is especially egregious for those who are supposed to be role models of young B’not Yisrael,” read the letter, which began by acknowledging the school’s “outstanding obligations” to the teachers. It was signed by Sam Gross, then-president of the board who is being accused of personal liability for the unpaid wages. Gross could not be reached for comment.

“We will utilize all appropriate measures at our disposal both halachically and legally in response to these actions,” said the letter. In an affidavit later filed by the defense, Gross argued that a civil court would be unable to understand the halachic issues regarding payment of wages.

Tolchin echoed the sentiment and said it was “remarkable” that a group of “Orthodox, religious women would create a high-profile lawsuit in court instead of taking the matter to a rabbinical court and having it disputed in a respectable way.”

Frieda Lev, who worked in food service at Shulamith for 28 years, said she received a letter from a local beit din (religious court) taking her to task for complaining about the school’s actions. And she said that Rabbi Moshe Zwick, the executive director at the time, called her into his office to berate her.

“He told me how dare I talk lashon harah [evil speech], and that it was damaging the school’s image,” she said. “The chutzpah it takes to say we were not behaving halachically when we are the ones who weren’t paid. It’s black and white in the Torah — you pay your workers,” she said, referring to Leviticus 19:13, “Do not withhold the wages of a hired employee until morning.”

Rabbi Zwick, who is also being accused of personal liability for the unpaid wages, has not been available to discuss the matter.

One veteran teacher who is a plaintiff in the case said she asked her rabbi if she had to go to beit din to resolve the dispute. “He said absolutely not,” she recalled. “He explained that a beit din’s job is to resolve matters in dispute. In this case, there was no dispute. We were owed money — the school repeatedly acknowledged that we were owed money — and we just weren’t paid.”

One source close to the case, who asked to remain anonymous for privacy reasons, said Shulamith is fighting to keep payments down because any money spared will be split between the Brooklyn and Long Island schools. According to the court documents on the sale of the Brooklyn building in July 2014, the net proceeds “shall be divided between petitioners” after all debts are paid. The 2013 settlement agreement between the two schools notes that “any savings in the payment of the expenses … shall be to the benefit of both parties.” (Ironically, Section 22 of the agreement requires that any dispute be resolved in secular court and expressly states that neither party can commence an action in a “religious tribunal,” aka a beit din.)

For now, the plaintiffs appear frustrated and exhausted by the long ordeal, and deeply disillusioned with the legal and religious authority figures they once respected. “When you believe in a community, in people’s basic integrity,” said Shoshana Kimmel, a plaintiff who sent all four of her daughters to Shulamith, “and when you believe in the American justice system, and they all seem to fail you, it’s easy to feel invisible.”

Correction issued on 9/6/16: Shulamith School for Girls was founded in Borough Park in 1930, not Midwood. We regret the error.