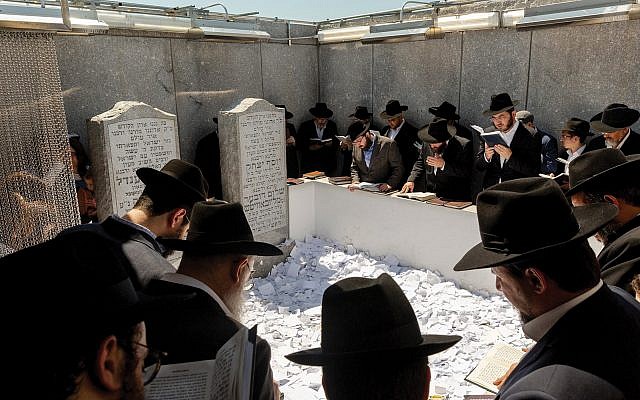 Thousands of Jews visited the gravesite of the Lubavitcher Rebbe last weekend to mark the 25th anniversary of his death. Mark Abramson/Chabad.org via JTA

Twenty-five years ago, when the Lubavitcher Rebbe died, his movement, Chabad-Lubavitch, was supposed to die, too. No sooner had the Rebbe, Menachem Mendel Schneerson, died in June 1994, than The New York Times reported, “Observers of the movement believe that some sort of leader will be needed if the movement is going to weather the factionalism … .”

And 25 years later, a professor wrote a column for the JTA news service, “what today’s Lubavitchers lack is a single leader who can control any deviance in the movement or offer something new and exciting.”

What ever did happen to Chabad, anyway? Have any college students or travelers far from home, or non-Chabad parents of toddlers looking for a pre-school, ever found Chabad to offer anything “new and exciting,” comparable to anything else in the Jewish world? After 25 years without a new Rebbe, not even a remote candidate, surely Chabad should have withered, becoming a whisper of its former self, imploding in its messianic rubble. Experts said so.

As Churchill said defiantly about the prediction that Germany would wring England’s neck like a chicken: “Some chicken,” said Churchill. “Some neck.”

In 1994, when Rabbi Schneerson, who became Rebbe in 1951, last sent his emissaries (shluchim) into the field, there were 2,800 Chabad husbands and wives in the field, “co-directors” of Chabad Houses, in more than 40 countries. (This at a time when other Orthodox women were rarely, if ever, presidents of shuls.) And without a rebbe? The number has more than tripled: 9,400 co-directors in more than 100 countries, all 50 states, and scores of college campuses, including campuses once considered Jewish deserts that now attract 500 students on Friday nights, with students doing it all from baking the challahs to table-thumping singing. (Some 50,000 of the faithful packed the Rebbe’s grave in Queens last weekend to mark his 25th yahrtzeit.)

Aren’t they still drunk with Beshtian messianism? As Lincoln said, when told Gen. Grant was a drunk, “Find out what he’s drinking and give it to my other generals.”

Just as the Nazis relentlessly hunted every Jew in Europe, the Rebbe relentlessly sent emissaries to care for every Jew on the planet. One emissary found himself in the Aleutian Islands. He couldn’t find a Jew. In a public school classroom he asked if there were any Jewish children. None. Then, a young girl, the teacher’s daughter, raised her hand: “Mommy, so we’re not the only Jews in the world?”

The mother asked the emissary to talk to her daughter. He had one shot at igniting her soul. He said, “All around the world, women and girls bring in Shabbos by lighting candles,” following the Friday sunset with every time zone, from Australia, then Israel, then seven hours later in New York. “The very last time zone is here in the Aleutian Islands… You will also be the very last Jewish girl in the world to bring in Shabbos with your candles.”

The Rebbe is having more of an afterlife than anyone dreamed.