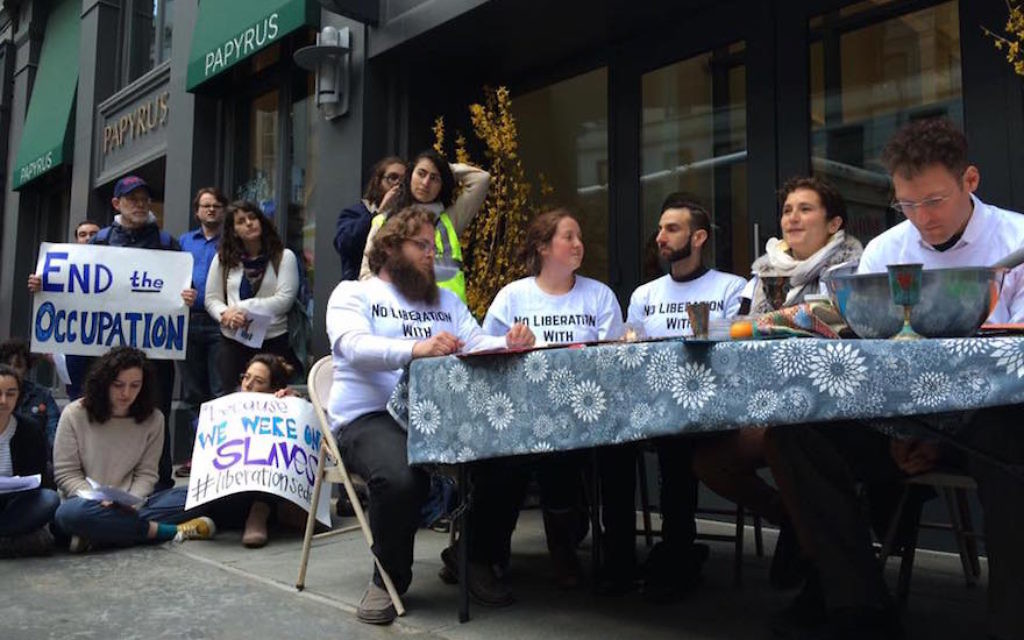 Police arrested 23 activists from an anti-Israeli occupation group at two protests, one at an Anti-Defamation League office and another at an American Israel Public Affairs Committee headquarters.

Seventeen protestors were arrested in the lobby of the ADL’s headquarters in New York City Wednesday. Six were arrested at AIPAC’s Boston office Tuesday after chaining themselves to a symbolic Passover seder table.

The activists were protesting on behalf of IfNotNow, a group formed in 2014 calling for “the end of the American Jewish community’s support for the occupation.” The group was co-founded by Simone Zimmerman, who was fired by the Bernie Sanders campaign two days after being hired as its Jewish outreach coordinator last week. Zimmerman, a former J Street activist, had called Israeli Prime Minister Benjamin Netanyahu a “manipulative asshole” in a Facebook post.

A similar protest was planned for Thursday in San Francisco.

At the New York protest, some 100 protestors held a sign reading “Liberation Passover seder” in the lobby of the building where the ADL is located, the Forward reported. They wore shirts reading “No liberation with occupation” and sang songs in Hebrew.

In Boston, around 75 protestors held a mock seder outside the AIPAC office building. Six who chained themselves to the seder table and refused to leave were arrested.

“The occupation is a daily nightmare for Palestinians who live it and a moral disaster for Jews who support and administer it. This year, we say that nobody can be free while others are oppressed,” IfNotNow said in a press release Wednesday.

In a statement Thursday, ADL CEO Jonathan A. Greenblatt said IfNotNow and the ADL share the same goal of a two-state solution.

“ADL had no role whatsoever in the arrest of the protesters,” Greenblatt said. “The protesters trespassed in the lobby of a private office building in which ADL happens to be one of dozens of tenants.”

“It is unfortunate that [If Not Now] seems to be more interested in spectacles and ultimatums than in discussion and dialogue grappling with the difficult issues involved in achieving peace,” he added.