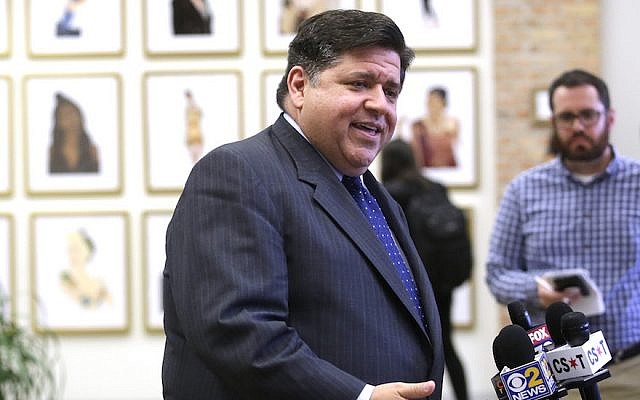 J.B. Pritzker shown at an event in Chicago, Oct. 1, 2018. The Jewish billionaire will be the next governor of Illinois. JTA

(JTA) —  Democrats took control of the House of Representatives in the midterm elections held Tuesday, with Jewish Congress members poised to take key leadership roles. Republicans looked to increase their majority in the Senate.

Democrat Jared Polis will be the first Jewish and first gay governor of Colorado, and J.B. Pritzker, a Jewish Democrat, will be the next governor of Illinois. And two Jewish military veterans won upset Democratic victories in House races: Max Rose in New York and Elaine Luria in Virginia.

Here are more results in races of significance to Jewish voters:

In Michigan, Rashida Tlaib, a Palestinian-American, handily won her race in District 13. Tlaib favors a one-state solution to the Israeli-Palestinian conflict and has opposed U.S. aid to Israel. She will also be one of the first Muslim women in Congress, along with Ilhan Omar, who won in Minnesota.

Michigan Democrat Elissa Slotkin, who was raised on a farm and worked for the CIA, won a seat in the House of Representatives by 49 percent to 48 percent for sitting Republican Rep. Mike Bishop. The district had previously been considered a lock for the Republican party. Bishop conceded in a phone call at about 1 a.m.

And Alexandria Ocasio-Cortez, the progressive millennial from New York City who won an upset primary win earlier this year, will become the youngest woman ever elected to Congress. Ocasio-Cortez has criticized Israel’s West Bank occupation and called its clashes with protesters in Gaza a “massacre.”

Republicans who charge that the Democratic Party has departed from its pro-Israel bona fides pointed to Cockburn, Tlaib, Ocasio-Cortez and Omar as proof.

Rep. Lee Zeldin, one of two Jewish Republicans in the House, fended off a challenge in his New York district by a Jewish Democratic challenger, Perry Gershon. The race on Long Island pitted Zeldin, a staunch supporter of Donald Trump, against an opponent who reviled the president.

Elaine Luria, a Jewish former Navy commander, won her race in a coastal Virginia district that encompasses the Norfolk U.S. Navy base. She once organized a Passover seder on an aircraft carrier.

Dean Phillips, a Jewish Democrat in Minnesota whose father was killed in the Vietnam War before he was born, won his race in a Republican district.

Susan Wild, a Jewish Democrat in Pennsylvania, flipped her Republican district. She became involved in Jewish activism after her son urged her to join a local synagogue. She is on the local Jewish federation’s board of directors.

Lena Epstein, a Jewish businesswoman who invited a defrocked Messianic rabbi to address a rally headlined by Vice President Mike Pence, will lose her House race in Michigan. The result is a Democratic pickup of a House seat. Epstein, a Republican with roots in the suburban Detroit Jewish community, chaired Trump’s 2016 presidential campaign in Michigan.

In North Carolina, Democrat Kathy Manning, a philanthropist and longtime Jewish organizational leader, lost her House race. She was the first woman to chair the Jewish Federations of North America and was a founder of Prizmah, an umbrella association for Jewish day schools.

In Washington State, the votes in the race between Jewish pediatrician and Democratic Congressional candidate Kim Schrier and Republican Dino Rossi were still being counted on Wednesday morning. With 64 percent of the vote counted, Schrier was leading 52.9 percent to Rossi’s 47.1 percent to fill the seat of  retiring Republican Rep. Dave Reichert. She has said she was partly inspired to run after seeing the 2017 neo-Nazi rally in Charlottesville, Virginia.

Arthur Jones, the neo-Nazi who won the Republican nomination on Chicago’s South Side, lost his race, as expected. He had won his nomination unopposed and was repudiated by his party, but still managed some 30,000 votes.

And Steve King, the Iowa Republican who has made headlines recently for his associations with and support of white supremacists, won reelection in a close race. The National Republican Campaign Committee had said it would not support him.

Sen. Robert Menendez of New Jersey, a Democratic pro-Israel stalwart, best back a challenge from businessman Bob Hugin. Menendez voted against the 2015 agreement on Iran’s nuclear program, going against President Barack Obama and his own party. Menendez had been hampered by a corruption trial that ended in mistrial last year.

Jared Polis, 42, a former tech mogul, will succeed John Hickenlooper as governor of Colorado. His campaign has focused on renewable energy, education and income inequality.

In Florida, Republican Ron DeSantis narrowly beat Democrat Andrew Gillum for the governorship. DeSantis, a close ally of Trump, was a leading voice urging the president to move the U.S. Embassy in Israel to Jerusalem. He also accused Gillum of being anti-Israel — a charge Gillum denied — and Israel featured prominently in one of their debates. An anti-Semitic group also ran a robocall on behalf of DeSantis, which he denounced.

In Florida, voters passed a ballot initiative to restore voting rights to 1.5 million former felons, which could work to Democrats’ advantage in future elections. Jewish groups led the charge to pass the initiative.