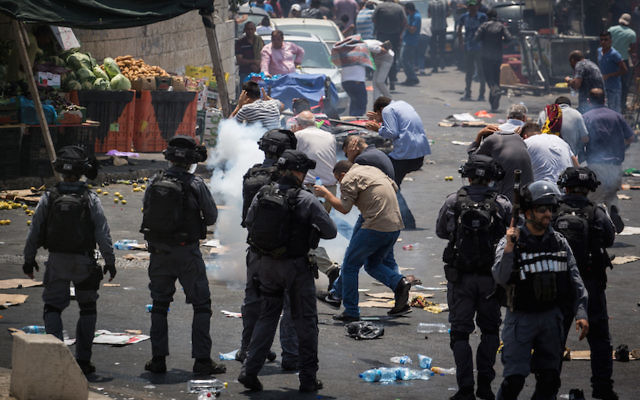 Two Palestinians were killed in clashes between rioters and police in Jerusalem over the Israeli government’s decision to keep in place indefinitely metal detectors at the entrance to the Temple Mount, the Palestinian media reported.

Thousands of Israeli soldiers and troops were deployed in eastern Jerusalem following riots Thursday, which resumed Friday afternoon, Israel’s Channel 2 reported. Six police officers and an unknown number of rioters were injured Friday outside the Old City of Jerusalem, a spokesman for the Israel Police reportedly told the Palestinian Maan news agency. The police said they were not immediately aware of fatalities in clashes.

Some 42 people were wounded in clashes Thursday night between security forces and Palestinian protesters, who rioted during rallies against the introduction of metal detectors last week, Army Radio reported.

The metal detectors were placed at the entrance to the Temple Mount compound, which contains the Haram al Sharif area that is holy to Muslims, after three Arab-Israeli terrorists killed two police officers near the mosque on July 14. The gunmen were shot dead by troops who pursued them.

On Friday morning, the office of Israel’s transportation and intelligence minister, Israel Katz, published a statement confirming the decision on the detectors by the “cabinet on security and foreign relations,” a reference to a forum of decision makers from within the Israeli government that includes Prime Minister Benjamin Netanyahu, Defense Minister Avigdor Lieberman and Katz, among others.

“The cabinet has decided to keep in place all the measures decided upon following the lowly attack, including the use of metal detectors,” Katz said. “The Israel Police is responsible for implementing this policy.”

On Friday, thousands of men chanted about Allah and their devotion to the Al-Aqsa mosque, which is in the Haram al Sharif compound.

The Palestinian leadership and several other Arab leaders called the use of metal detectors a provocation. According to Army Radio, Palestinian Authority President Mahmoud Abbas called Jared Kushner, a special adviser to President Donald Trump with responsibility for peace talks between Israel and the Palestinians, on Thursday and asked him to make sure Israel removes the devices.

The police said they would not allow Muslim worshippers younger than 50 to pray at the mosque on Friday, but that women of all ages would be allowed to enter the compound.

The Palestinian Red Crescent said that 36 of the protesters were taken to the hospital for treatment. Two were in serious condition after being hit by rubber bullets, the group said.

“This is not a political matter; it is a professional, security issue,” he said in a statement. “No one is challenging the status quo on the Temple Mount and I call on all Muslim residents to help maintain the calm, not to act violently and to obey the police’s orders. Those who come to pray in peace are welcome. Those who come to engage in terror and provocation will be dealt with harshly.”