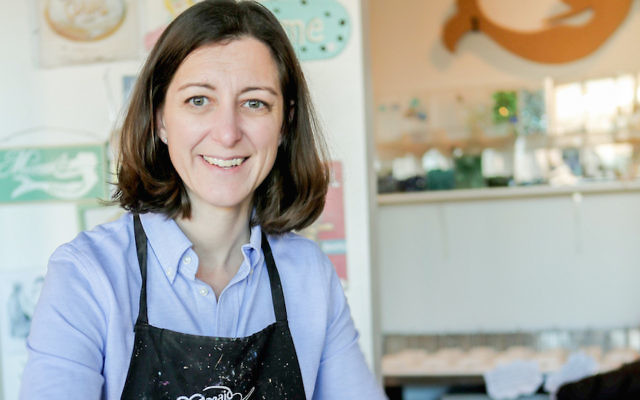 Elaine Luria at the Norfolk, Va., shop she owns called the Mermaid Factory. (Courtesy of the Luria campaign)

Luria was projected to win while holding a lead of 4,000 votes over Republican Scott Taylor in a district that includes the Norfolk U.S. Navy base. Luria, a former Navy commander, was the first woman to spend her entire Navy career aboard combat ships.

Rose, who was awarded a Purple Heart and a Bronze Star for his service in Afghanistan, unseated Dan Donovan in New York’s 11th District. He campaigned as a Democrat who is ready to defy his party leadership.

Rose and Luria were among six Jewish veterans running for the U.S. House of Representatives.

Another Democrat who turned a House district from Republican was Chrissy Houlahan, an Air Force veteran whose father is a Holocaust survivor, in Pennsylvania’s 6th comprising the Philadelphia suburbs. Houlahan said her father’s story — he became a U.S. Navy officer — inspired her to run. She does not consider herself Jewish.

Posted by Elaine Luria for Congress on Tuesday, 6 November 2018