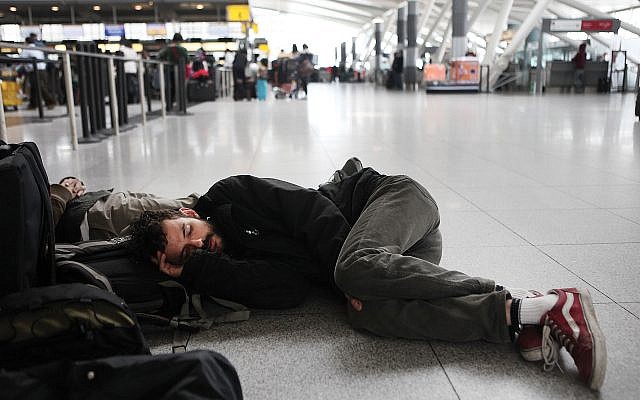 Remember that crazy snowstorm that paralyzed New York last week? For travelers getting a jump start on Thanksgiving week, it was little comfort that mid-November had not seen such snowfall (6.5 inches in Central Park!) for over a century.

One of them was my friend Anna, who, since her parents’ death, has escaped to Paris for a new holiday tradition with her husband and son: Turkey Day in the Marais.

On the afternoon of the storm, I got a series of frantic texts from the back of Anna’s Uber, detailing what felt like a hopeless situation: The check-in cutoff for her Paris flight was 6:40 p.m.; the airline was implacable on this point. It was the single daily flight for a boutique carrier, and if Anna’s family missed it, they’d forfeit the tickets.

As their car slogged through sleet on a highway littered with spun-out vehicles, the GPS kept flashing a late-evening arrival time. Anna was despondent, and her son was teary. “If you’re in this situation, so is everyone else,” I texted back. “This time tomorrow, I bet you’ll be eating boeuf bourguignon.”

But, I added: “Your son is learning a valuable lesson about international travel.”

Sooner or later, every traveler will learn this lesson. As we head into the holiday travel season, here are tips for handling the unforeseen complications of flying.

Preparation = peace of mind. That’s both mental and logistical: I always embark on a trip figuring I might arrive a day late and spend at least $100 extra on hotels or taxis. Cheese sandwiches and backup chargers have been lifesavers at airports after the concessions (and sometimes the airline offices) have closed.

While Anna’s son surely did not want to hear it, being able to shrug and accept the inevitable is part of travel.

Who pays for unforeseen expenses? Airlines are not responsible for inconveniences related to weather — or even, in most cases, for delays due to mechanical problems or logistics. For the latter, however, agents may be authorized to issue food and/or lodging vouchers. It varies by airline and scenario, but if you’ve been delayed more than three hours and feel you’re entitled, definitely ask.

Overseas travelers should know that European rules are more passenger-friendly; flights originating in Europe, even on U.S. airlines, require companies to reimburse passengers for delays.

It goes without saying that airlines are also not responsible if you arrive too late to board. Many major carriers will rebook without penalty if you call in advance with a reasonable excuse, but others won’t.

If a storm is threatening, however, many airlines will rebook at no charge for a later flight. I’ve found JetBlue to be especially helpful with this (and pretty much everything else).

You may get better help remotely. Phoning or contacting the airline via its online app are often faster ways to resolve your issue than standing in line. Twitter, or other social media, can also be effective for speedy contact and resolution. Be polite, even if you’re frustrated. My first-grade teacher had it right: “You’ll catch more flies with honey than with vinegar.”

A travel credit card may help. Certain credit cards — including several from Chase Sapphire, traveler favorites — may reimburse up to $500 for costs incurred due to weather or to mechanical-related delays on flights booked with the card. If you fit this scenario — or if you have travel insurance that may cover cancellation — document everything to submit for reimbursement: boarding passes, receipts and any other proof of travel.

Shabbat observant? Plan for delay scenarios. Many of those heading out of town during that Thursday storm had planned to arrive at their destinations before Shabbat. A 24-hour buffer is always a good idea, but  — especially during the overbooked holidays — it may still not be enough; traveling on Sunday is a better strategy.

Don’t lose track of essentials … or your sense of humor. My mantra: Never check anything you can’t afford to lose.

One December, Oggi and I arrived at the Madrid airport to discover that our connecting flight had been cancelled due to snow. One inch of snow, to be precise — but it was enough to rattle the Spaniards, and to create a cascade of delays that left us stranded (on Iberia’s tab!) at a very nice Madrid hotel for three nights, living out of our carry-ons until seats to New York opened up.

As for Anna, she spent the evening at Newark, where the flight —like her car, and everything else that evening — was badly delayed. The next day, I got a text showing a platter of boeuf bourguignon. “You were right,” she wrote happily.