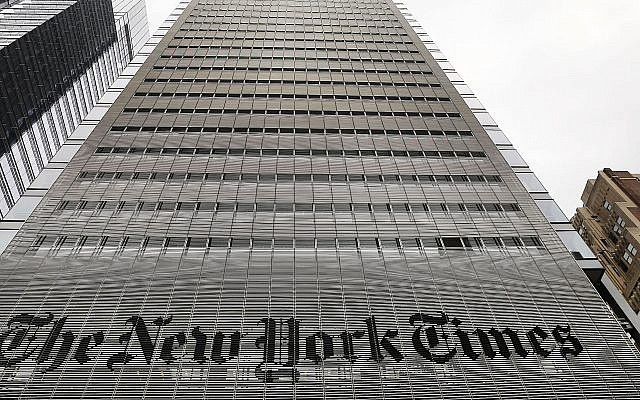 NEW YORK (JTA) — A dozen rabbis from across the major denominations met with the publisher and editorial page editor of The New York Times regarding the anti-Semitic cartoon it published and its general coverage of Israel.

The meeting Wednesday morning at The Times offices in Midtown Manhattan lasted an hour and a half and was organized through the New York Board of Rabbis, an interdenominational group. Rabbi Joseph Potasnik, the group’s executive vice president, said A.G. Sulzberger and James Bennet, the publisher and editorial page editor, “owned the problem” of the cartoon being anti-Semitic.

The cartoon, which was published last month in the opinion section of the paper’s international edition, depicted Israeli Prime Minister Benjamin Netanyahu as a dog on a leash leading a blind President Donald Trump. The U.S. leader was drawn wearing a yarmulke and Netanyahu’s collar had a Star of David.

The Times has apologized for the cartoon and published a staff editorial criticizing it. The newspaper said it has updated its “unconscious bias” training in the wake of the controversy, disciplined the editor who published the cartoon and dropped the syndication service that provided it.

“It gave everyone an opportunity to express their feelings,” Potasnik said of the meeting. “Everyone was very forthright, very frank about what they felt. … I felt it was a healthy, honest exchange, and that’s what’s necessary.”

Potasnik said the majority of the meeting was spent discussing The Times’ coverage of Israel, which many pro-Israel advocates have long viewed as negative toward the country. He said Sulzberger and Bennet were receptive to the rabbis’ comments, and that the group planned on meeting again.

“It’s the reporting issue,” he said. “What’s the culture at The Times vis a vis Israel? All those issues came up. The cartoon was the beginning of the conversation, but not the majority of it.”