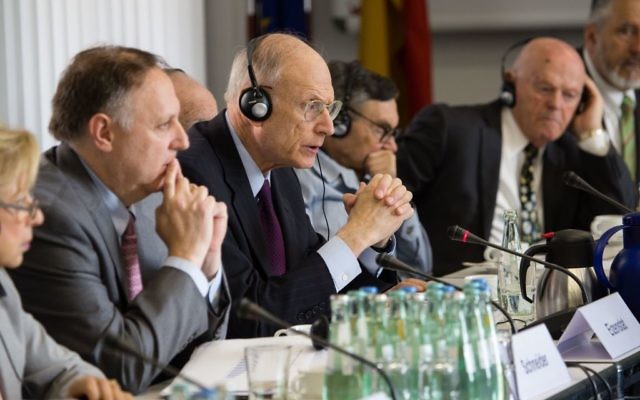 The Claims Conference has negotiated another $100 million from Germany for welfare assistance programs for needy Holocaust survivors next year, a move negotiators are calling “a big step forward to closing a lot of gaps” in aid.

Ambassador Stuart Eizenstat, the Claims Conference’s special negotiator, told The Jewish Week that although the timing of the talks was not the most propitious because of upcoming German elections, “there really was a breakthrough in a number of respects.”

“While we kept the cap on homecare this year at $359 million, we argued that associated issues — in particular food, medicine and homecare costs — have increased, and so they are giving another $103 million dollars,” he said, noting that last year both sides had agreed there would be no increase in the 2018 homecare allocation.

But a major survivors’ organization, the Holocaust Survivors Foundation, said in a statement that a “quick reading of the results of these so-called negotiations makes clear there was no intention in helping all the survivors who continue to suffer year after year.”

Although German negotiators did not agree that Iasi, Romania, was an open ghetto during the Holocaust, Eizenstat said his team of negotiators employed some “creative” methods to convince them to pay about 1,000 survivors from that city a pension of $350 a month — the same amount paid to survivors of both open and closed ghettos. He said the trauma those survivors experienced was extraordinary. 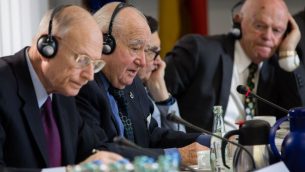 “In a one-day period, 14,000 Jews there were murdered, including men the Nazis put on what was designed as a death train,” Eizenstat said. “The Nazis closed all the ventilating slates, killing most of the men.”

Those who survived were forced to drag the bodies of those who died from the train and – at gunpoint – forced to dig ditches and bury their loved ones in mass graves.

“The horrors inflicted on the Jews of Iasi have finally been recognized more than 70 years later,” Eizenstat added. “These survivors endured unimaginable suffering. For those who are still with us, we have obtained a small measure of justice, even after all this time.”

The Germans agreed also to reduce from six to four months the time those in hiding or living under a false identity would be eligible to receive a pension. About 1,000 survivors will now be covered, according to Schneider.

Although most people took the one-time payment in the 1950s and ‘60s, some opted instead to receive a monthly pension. There are still 27,000 survivors who continue to receive those pensions each month and they are not affected by this agreement.

“The horrors inflicted on the Jews of Iasi have finally been recognized more than 70 years later.”

None of the German negotiators were alive during World War II. Eizenstat said “some of them are in their late 30s and early 40s, and yet they still incorporate a sense of historical and moral responsibility” for what Germany did to the Jews during the Holocaust.

He quoted Werner Gatzer, state secretary in the Finance Ministry, as saying, “We intend to do the right thing in the darkest period of history.”

Leo Rechter of Queens, president of the National Association of Jewish Holocaust Survivors, said he welcomed the additional money but questioned why there was not sufficient money from Germany to care for all of a survivors’ health care needs.

“There is always a little bit more each time,” he said. “Homecare hours are increased from 30 to 55 to 75 hours a week, and then are reduced back to 70 hours a week. That is why we say they should cut out the bits and pieces and decide to take care of all the healthcare needs of survivors — whatever they need.”

“There is a higher percentage of survivors who are getting cancer, and survivors in their 80s and 90s cannot carry the burden of their healthcare costs,” Rechter added.

Eizenstat said he agreed and credited a meeting with Finance Minister Wolfgang Schauble as the reason for the breakthrough in the talks. He said it was the first time he had met with him.

“While he was non-committal, our presentation helped break the ice,” Eizenstat said. “We said we are now entering the last phase of this historic German” compensation program that has already paid survivors $70 billion since it began in 1952.

“We said we need to think of closing as many of remaining gaps as we can before it is too late,” he recalled. “We said the last phase will last only 10 or 15 years and that it should end with the same positive feelings we have had in the past. We said let’s stop needling the details and really develop momentum for the last phase of the program.”

A study released earlier this month by the American Cancer Society’s Cancer Journal examined 152,622 Holocaust survivors over the course of 45 years in Israel. It found that 22 percent of those who received German compensation for their suffering during the Holocaust developed cancer, compared with 16 percent of those who did not. More specifically, it found that those who were awarded compensation had a 12 percent higher chance of having colon cancer and a 37 percent higher chance of having lung cancer.