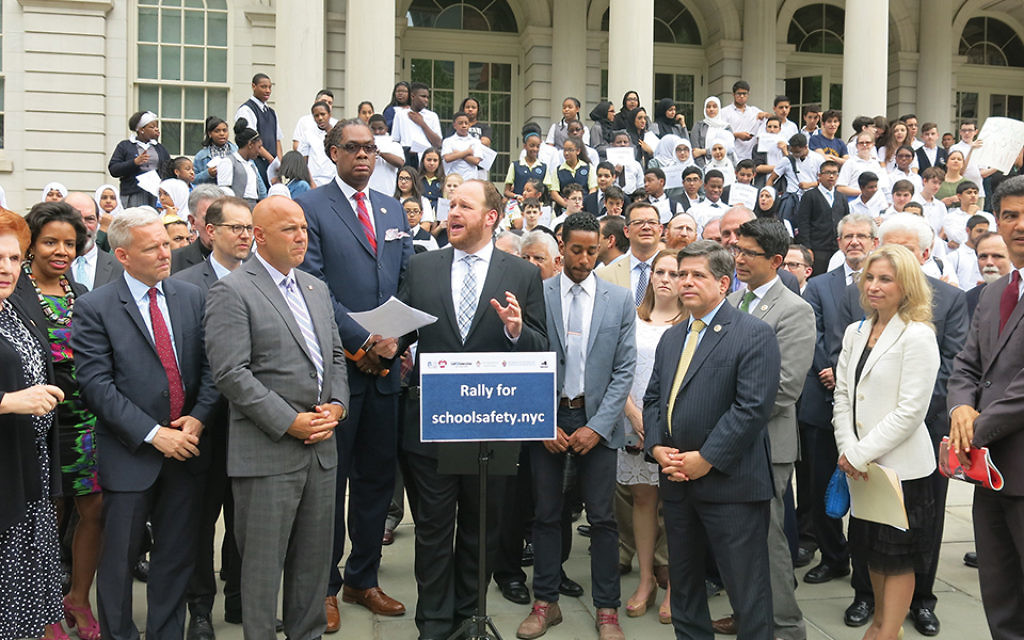 The City Council is set to pass a bill that will require the city to pay for private security guards at roughly 350 private schools across the city, including about 100 Jewish schools.

The agreement between the council and the de Blasio administration, announced last week, allocates up to $19.8 million for security agents at private schools with 300 or more students. By limiting the program to only larger schools, the cost dropped from the estimated $50 million it would have cost to pay for agents at all private schools. The city already pays for guards at its 1,800 public schools.

Mayor Bill de Blasio framed the plan to pay for agents at only the larger private schools as a good compromise between fiscal and safety concerns.

“The safety of all children is our collective responsibility, and that’s something the NYPD and city agencies act on each and every day,” he said in a statement Monday. “We’re pleased we could work productively with Speaker [Melissa] Mark-Viverito, Councilman [David] Greenfield and their colleagues on an initiative that gives the administration the flexibility to develop a program that recognizes community needs, while addressing administration concerns about diverting critical police resources. This will be a targeted and fiscally responsible effort that will bolster security where it’s most appropriate.”

Like safety agents at public schools, the guards will not carry guns. But Jake Adler, New York State policy at OU Advocacy, the Orthodox Union’s lobbying arm, says the guards are still effective. “The idea of an unarmed safety agent is part deterrent, and it’s an extra pair of ears and eyes and to be in touch with the precinct,” he told The Jewish Week.

Benjamin Mann, who heads Solomon Schechter School of Manhattan, said that unarmed security guards are still able to monitor everyone who comes into the building and can press an alarm button that alerts the NYPD immediately and lets school officials know to begin lockdown procedures.

With a student body of 127, Schechter doesn’t qualify for the funding and will have to continue to pay for a security guard on its own. But Mann still applauded the bill, saying that it is a good first step that hopefully will be expanded to all private schools in the future.

“As a nonpublic school we’re thrilled that the City Council and mayor put safety and security of students first,” he told The Jewish Week. “Obviously we’re disappointed that as a smaller school we’re not going to be included in the funding, but we applaud the City Council for taking steps to make sure all the children in the city are protected.”

The agreement comes after heavy lobbying from religious groups. In June the bill’s supporters launched a $100,000 ad campaign calling on the mayor to support the bill and organized letters in support of the bill from 24 area rabbis representing 15,000 congregants, as well as one from the Archdiocese of New York.

The deal was reached less than two weeks after terrorists killed 128 people in Paris and two and a half years after Greenfield, who represents the heavily Orthodox neighborhoods of Borough Park and Midwood, introduced the measure in response to the shooting of 20 children and six adults at Connecticut’s Sandy Hook Elementary School in 2012.

“As security is increased in light of recent events and religious communities face especially heightened concerns, it is especially critical that all students are protected regardless of what kind of school they attend,” Maury Litwack, director of state political affairs for the Orthodox Union, said in a statement from the OU, which led the push for the bill.

“With this landmark legislation New York City is making a bold statement that the safety of every child is important — no matter what their background is or what kind of school they attend,” he said in a statement. “With security threats looming around the world and in New York City, now is the moment to make this important investment in the safety of our young people.”

But not all education officials support the bill. Jackson Heights Councilman Daniel Dromm, who chairs the council’s education committee, calls the measure a private school “giveaway” and that the allocation should have been decided as part of larger budget negotiations rather than legislated separately.

He said there’s already a problem with over-policing in the schools and that the money could be better used for other things while the NYPD handles school safety based on concrete threats.

“As chair of the education committee I feel it’s my obligation to fight for every dollar for public school students,” he said, noting that the New York City public school system has 5,400 safety agents and only 3,000 guidance counselors.

About 250,000 students attend more than 800 nonpublic schools across the city, including more than 110,000 who attend Jewish schools, according to the Orthodox Union.