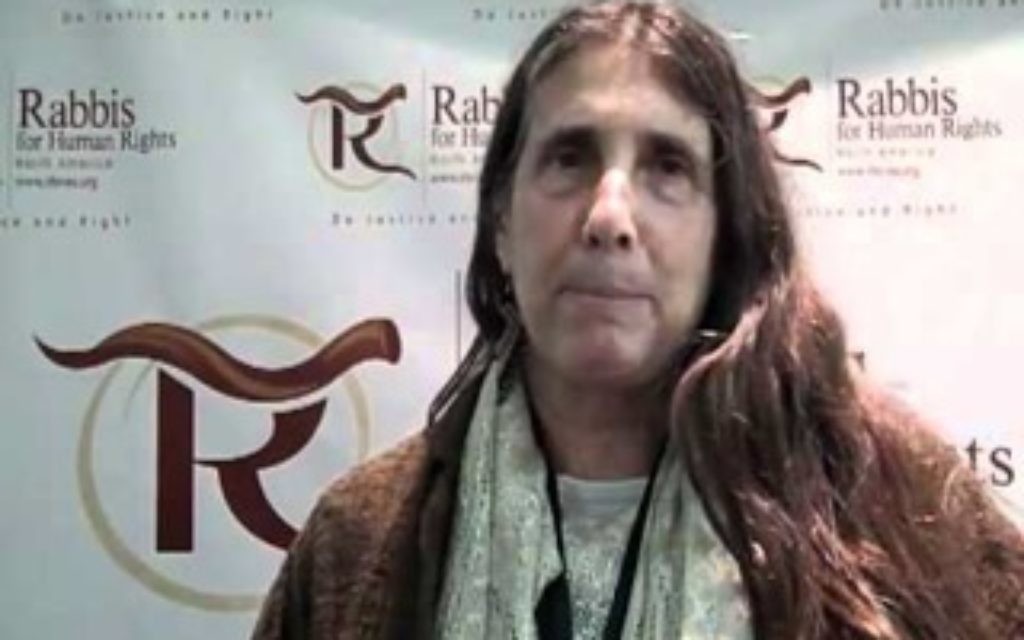 Lynn Gottlieb, a Jewish Renewal rabbi whose belief in fostering peace is so strong — or misguided — that she led two peace trips to Iran in 2008 and publicly spoke of the need for peace at a dinner here with Iranian President Mahmoud Ahmadinejad, has been branded a “radical rabbi.”

The Republican Jewish Coalition bestowed the description in a press release that called on Rabbis for Obama to remove her name from a list of more than 600 rabbis who have endorsed the president’s re-election.

The release claimed Rabbi Gottlieb is a rabbi “whose extreme views are well beyond the mainstream of the Jewish community and the mainstream of America.” It said that by including her name on the list of rabbinic supporters the coalition was “promoting and showcasing” her and thus lending legitimacy and credibility.”

Rabbi Gottlieb, 63, told The Jewish Week by phone Thursday that she was not aware of the press release and that it would probably go unnoticed because no one else had called her about it. But judging by the number of stories about this incident on the Internet the next day, the rabbi must have been deluged with calls.
Asked whether she would consent to removing her name from Rabbis for Obama, Rabbi Gottlieb told The Jewish Week: “If they want me to, it would be fine. I would not want my association with Obama to harm his chances of getting elected.”

Rabbi Burton Visotzky, a professor of Midrash and Interreligious Studies at the Jewish Theology Seminary, a co-chair of Rabbis for Obama, said he has known Rabbi Gottlieb “for over 35 years when she studied Talmud at the seminary and I was in a class with her.”

Asked if Rabbis for Obama would ask her to withdraw from the group, Rabbi Visotzky said he had not had a chance to discuss it with the other co-chairs and therefore would have no further comment.

Rabbi Gottlieb said the RJC statement was an “attempt to characterize the Democrats as radicals, as socialists. … I see this as an effort to delegitimize a critique of Israeli state policy towards Palestinians, and in so doing divide the Democrats and give Jewish people more reason to vote for [Mitt] Romney.”
Will it work?

“I don’t know,” Rabbi Gottlieb said. “People are easily motivated by fear and the theme of anti-Israel. … I know my positions are controversial. There hasn’t been a time in my life when that hasn’t been true. I’m one of the earliest women to promote feminism in the Jewish community.”

Another early Jewish feminist, Ms. Magazine founding editor Letty Cottin Pogrebin, named Rabbi Gottlieb in 2007 to her list of 50 Top [American] Rabbis.
The rabbi is now coordinator of interfaith peace walks at the Fellowship for Reconciliation, an interfaith group that promotes worldwide peace. And she said she is involved in a campaign by Israeli citizens called Israel Loves Iran, which opposes an Israeli military attack on Iran to halt its quest to develop nuclear bombs.
“Going into Iran is the height of madness and those of us on the outside are trying to spread this message to as many people as we can,” Rabbi Gottlieb said.

“When governments are ratcheting up the call for war, civilians reach out to other civilians in the so-called enemy country and try to establish peaceful relationships,” she explained.

The rabbi noted that during her trips to Iran she had a chance to meet Iranian civilians, including some of the thousands of Iranian Jews who still live there.
“The message they gave us when we met them individually was that no one is their right mind wants to be in a war. Iranian Jew do not want Israel to bomb Iran. I did not go seeking that message, but that was the message given to me.”

She said also that she favors “selective disinvestment” from companies that assist Israel in its occupation of the West Bank, as well as a boycott of products made by Israeli settlers.

“Those views are not extreme because there are thousands of Israeli Jews who agree with me,” she said.

The Republican Jewish Coalition pointed out that she is a member of Jewish Voice for Peace, which it said the Anti-Defamation League has called one of the “top 10 anti-Israel groups.”

Rabbi Gottlieb acknowledged being “an early participant” and said there are now about 50 other rabbis associated with it. She noted that 126,000 persons are on its listserve and that it has 36 chapters in the U.S.

She is also cofounder of the Shomer Shalom Network for Jewish Nonviolence.

Matt Brooks, executive director of the Republican Jewish Coalition, said in a statement that he could think of only two explanations for Gottlieb’s inclusion on the list or Rabbis for Obama: the Obama campaign failed to “properly vet” those on the list, or it “did properly vet the rabbis and chose to ignore Rabbi Gottlieb’s radical views. Either way, this speaks volumes about the Obama campaign’s judgment, and the RJC calls on the Obama campaign to immediately remove her from any formal or official involvement in the campaign.”

The RJC went on to point out that the list of Rabbis for Obama was released at about the same time that the campaign announced former President Jimmy Carter has been tapped to speak at the convention. Giving Carter, who the RJC noted has “met with Hamas and has been a virulent critic of Israel,” a platform at the convention “only highlights not only the insensitivity of the Obama campaign to the concerns of the Jewish community, but also underscores why President Obama has seen a significant erosion of support among Jewish voters.”